The transistor, the ubiquitous building block of all electronic circuits, will be 65 years old on Sunday. The device is jointly credited to William Shockley (1910-1989), John Bardeen (1908-1991) and Walter Brattain (1902-1987), and it was Bardeen and Brattain who operated the first working point-contact transistor during an experiment conducted on 16 December 1947.

Yet this now ubiquitous device - these days more as an element in silicon chip design than as a discrete component - has a history that goes back to the mid-1920s. 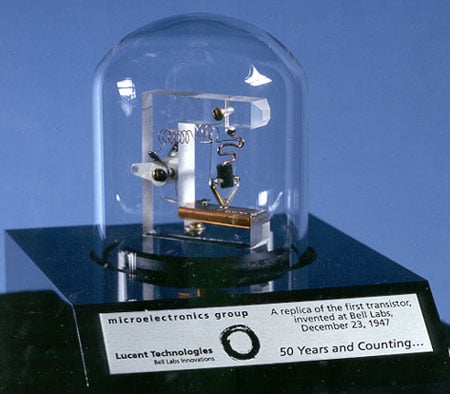 ”This is an abbreviated combination of the words ‘transconductance’ or ‘transfer’, and ‘varistor’,” Bell Labs’ voting paper put it at the time.

The team's work goes back to the late 1930s, but the real work didn't begin until after the end of World War II. Shockley proposed a field-effect transistor design that would be made out of thin slices of different semiconductors, including silicon, sandwiched together. Unfortunately, he wasn't able to get this design to work the way his maths anticipated, and so Bardeen and Brattain chose to investigate the simpler, surface-effect point-contact design. 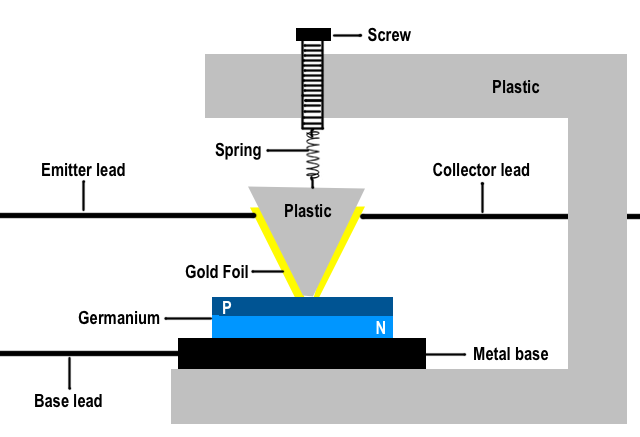 The structure of the first point-contact transistor

It went on to become the basis for all the transistors used in electronics products right up until the broad use of Complementary Metal–Oxide Semiconductor (CMOS) technology in the late 1960s following the discovery of the MOS by Bell Labs' John Atalla and Dawon Kahng in 1959, though their patent application wasn’t registered until 31 May 1960. It was granted on 27 August 1963.

Bell was finally able to put Shockley's junction transistor mass production in 1952, and afterwards licensed the design to other firms too, most notably a new, small Japanese company called Sony. Two years later, Bell replaced the germanium used in its transistors with silicon.