NASA has published a long and detailed explanation of just how its Curiosity rover managed to take a self-portrait.

The agency has posted a video, which we've popped at the bottom of the story, and lengthy text explanations of the way it assembled the shot below.

NASA says “Curiosity held the rover's Mars Hand Lens Imager (MAHLI) camera in more than 50 positions in one day to generate a single scene combining all the images, creating a high-resolution, full-color portrait of the rover itself.” 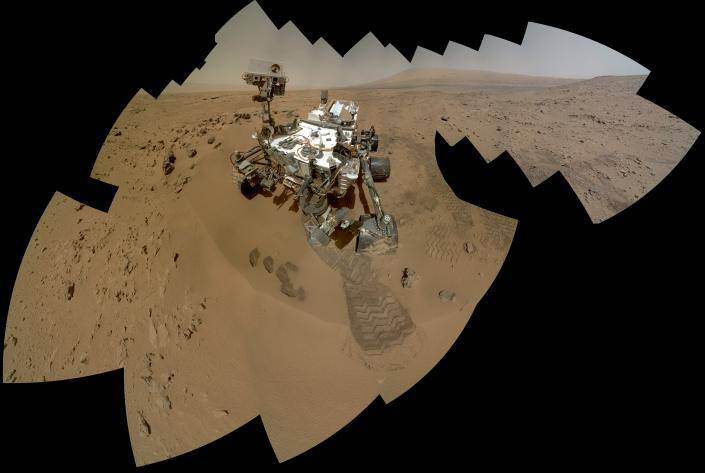 In case that explanation is not enough for you, NASA's post also offers the following:

“MAHLI is mounted on a turret at the end of Curiosity's robotic arm. The arm is not visible in the portrait because the arm was positioned out of the shot in the images or portions of images used in the mosaic. Some images taken during the day show portions of the arm. However, the Martian ground that the arm hides from view in those images is visible in alternative images chosen for the mosaic, taking the arm out of the scene.”

All of which is very interesting, but also just a little perplexing given that Curiosity is out there solving the riddles of the red planet. Surely the nature of our near planetary neighbour is just a tad more interesting than learning how a nuclear-powered, laser-equipped space tank takes selfies?

Those sympathetic with the reasoning outlined above may, at this point, want to refresh their memories on the topic of persistent theories that the Apollo missions were a hoax. An arm-free selfie from Curiosity, complete with inconsistent shadowing, is right up the alley of those who believe we never made it to the moon.

It doesn't take long to find very sceptical postulations about Curiosity online (that link's to a mild one).

Might NASA therefore be trying to head off the X-Files brigade before they start to offer their own explanations for Curiosity's selfie? That the agency has recreated the shot with the earth-bound test version of Curiosity could be a sign it is keen to prove the shots are easily achievable.

NASA's post on the matter is written in its usual calm tone, which is just what we here at El Reg would do if we wanted to crush a conspiracy. Or is NASA really sending a secret hint that Curiosity is on a Hollywood sound stage by revealing how the shots were created? Has anyone seen Martin Scorsese lately? What's Danny Boyle done since the Olympics?

The truth is out there. ®