N. Joseph Woodland, inventor of the barcode, dies at 91

Obituary The inventor of the bar code, Norman Joseph Woodland, has died at his home in New Jersey at the ripe old age of 91.

Woodland, along with colleague Bernard Silver, originally patented the invention back in 1952 as a way of encoding data on packaging. Woodland claimed that he was inspired by a mix of his Morse code training in the Boy Scouts and a day on the beach in 1949.

"I poked my four fingers into the sand and for whatever reason – I didn’t know – I pulled my hand toward me and drew four lines. I said: 'Golly! Now I have four lines, and they could be wide lines and narrow lines instead of dots and dashes'," he told the Smithsonian magazine

Three years later Patent No.2,612,994 was granted for "Classifying Apparatus and Method", although the original system called for the barcode lines to run in a circle. Woodland reasoned that the circular design would make it easier to scan no matter what the position of the label, but the design didn't immediately take off.

For a start, it was hampered by the technology of the day. The original scanner was a huge affair, requiring a 500W light source and an RCA935 photomultiplier tube taken from a film projector. After shopping the technology around various companies, including Woodlands' then-employer IBM, the two eventually sold the patent for a mere $15,000. 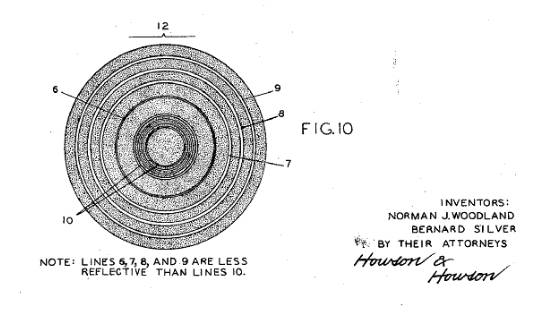 It wasn't until the 1970s that the system was adopted for its most commonly recognized use, scanning food in supermarkets. On June 26, 1974, a 10-pack of Wrigley's Juicy Fruit gum was the first item to be bought by barcode scanning and both the gum and the receipt are now in the Smithsonian Museum.

Woodland had a varied career at the cutting edge of technology. Born in 1921, he spent his early 20s working on the Manhattan Project, and after the war lectured in mechanical engineering at the Drexel Institute of Technology, where he met his co-inventor Silver.

From 1951 to 1987, Woodland worked for IBM and was presented with Big Blue's Outstanding Contribution Award in 1972. He also received the National Medal of Technology by President George Bush in 1992, and last year he was inducted into the National Inventors Hall of Fame for his barcode work.

Woodland is survived by a wife, two daughters and one grandchild. ®