You'll be back, just you wait, say telecoms charter bods

WCIT2012 According to UN agency the ITU, more than half the world's population will enjoy cheaper international roaming, faster connectivity, less spam and an improved economy.

This is all thanks to a new treaty of global telecoms regulations 89 countries have signed up to, the same one firmly rejected by America and its pals, who felt the pact was an assault on the free internet - and said the web is safer in commercial hands.

While closing this year's World Congress on International Telecommunications (WCIT), conference chairman Mohamed Al Ghanim and ITU General Secretary Hamadoun Touré slapped a gloss of optimism on their failure to get Western nations - including the UK, Australia and Canada - to sign on the dotted line. The get-together was organised by the ITU to get everyone signed up to a new set of controls on international connectivity and fees.

The ITU reckons the communications treaty - download the PDF, its 25 pages are too important not to read - will extend the internet's backbone into landlocked countries using fibre-optic cables, and get signees working together to fight spam. It will also allow foreign operators to appeal to domestic regulators, all of which should lead to lower prices and better connectivity even if the First World isn't interested.

Touré claimed the WCIT confab in Dubai was "very successful" and that he was "very pleased with the result". This is hard to reconcile with the behaviour of key powers who turned up, debated, argued, threw spitballs and finally walked away from the treaty, which is supposed to replace the agreement negotiated back in 1988 that is due to expire.

Google's energetic campaign against the ITU, running for the last few months, was built on the accusation that the UN was trying to wrest control of the internet from the freedom-loving people of the world. In doing so, the advertising giant put the confab in the crosshairs of the press.

Whether the WCIT would have been so open for public scrutiny without Google's campaign is debatable. All the decisions were discussed in public and while some drafting sessions were closed, and the 1,275 proposals weren't shared as broadly as one might like, it's about as open as an international treaty conference is going to get. 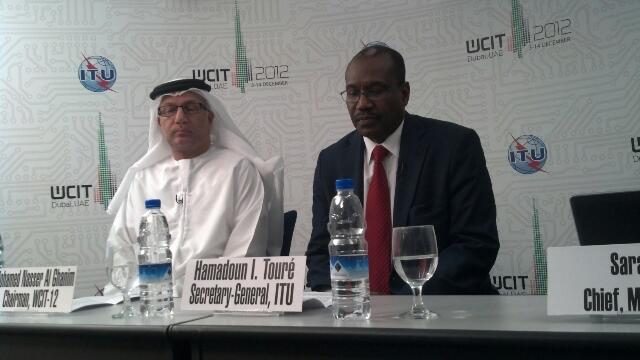 A complete success - you can see it in their eyes
WCIT chairman Mohamed Al Ghanim, left, and ITU boss Hamadoun Touré

One of the accusations regularly levelled at the US during the congress was that it refused to give any ground during the discussions. There's some truth to that but mostly because the US came to the conference with a position it intended to hold.

Russia, in contrast, arrived with wildly optimistic proposals from which it negotiated back; bluff and counter bluff are part of the process, but doing that in front of pundits poised over their collective keyboard is tough when they too refuse to compromise or accept an opposing viewpoint.

America and its allies* arrived with a firm position, and when the treaty didn't match that they walked.

The last treaty was initially rejected by 77 counties, all of whom eventually came round to the idea, and the ITU is optimistically expecting a repeat of that process over the next year or two. El Reg is less confident. The blogosphere has been riled now, and any attempt by Europe or America to consider the treaty would be instantly attacked.

Quite what that means come January 2015 when the current treaty expires, we don't know, but the digital divide between the connected nations and those seeking connectivity has never been greater. Two-thirds of the world's population hasn't got proper internet access, and most of those countries wanted this treaty. Meanwhile the minority - which has the fastest broadband - gets to extend its control from the internet into telephony, much to the delight of the Western blogosphere. ®

* The US was far from alone, though it did lead the pack to the point where the UK's only statement that wasn't "we agree with the Americans" was one that backed Jordan instead - Jordan's position being unequivocal support for what the US had just said.