Report: US telcos cashing in on data caps and poor competition

The increasing use of data-capping and high data charges on US networks is less about easing network congestion or funding investment and more about increasing profits, according to a new analysis by the non-partisan New America Foundation think tank.

"Data caps encourage a climate of scarcity in an increasingly data-driven world. Broadband appears to be one of few industries that seek to discourage their customers from consuming more of their product," the report states.

"Thus, even as the economic and engineering rationale for data caps on wireline broadband does not hold up given the declining costs of providing service and rapid technological advancement, the proliferation of data caps is increasing."

Limiting the amount of data customers can use makes no engineering sense in the wired broadband world, the report found. Network equipment manufacturers are increasing transmission speeds and lowering costs at almost Moore's Law levels, but consumers are paying the same – if not more – and are increasingly having their usage capped.

According to Time Warner Cable's latest 10-K report, connectivity costs as a percentage of revenue have decreased by half, from just 1.2 per cent in 2008 to just over 0.6 per cent in 2011. Meanwhile, Comcast reported average quarterly operating expenses for high-speed internet service as $147 million for 13 million customers in 2007, compared to $122 million for over 16.6 million three years later. 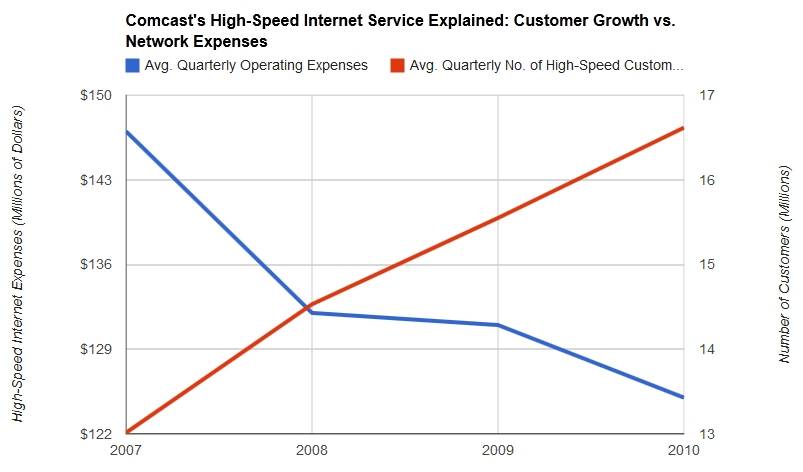 What data caps do in the wired broadband world, the report suggests, is preserve the business model of cable companies who have repurposed their networks for internet traffic. Cable firms want customers who will use them as an ISP, and also pay for TV channels – and that means capping their ability to access streaming sites such as Netflix.

Telecommunications companies argue that data caps are essential to combat bandwidth hogs, typically portrayed as downloaders and pirate types who consume vast amounts of data. But this type of user is relatively rare, while more and more people are finding themselves paying out for breaching data caps.

The report notes that when data caps were introduced in 2008 by Comcast, the average US household went through around 2.5GB of data a month. By 2012 this had quadrupled to 8-to-10GB per month, yet the capping levels remained unchanged until the US Department of Justice said it was investigating the issue.

Free market folks would argue that competitive pressure should correct this situation, since other providers would undercut the existing players. But a cosy regulatory framework means that there is very little competition in a lot of US markets, as Dane Jasper, CEO of independent ISP Sonic.net told The Register.

The 1996 Telecom Act passed during the Clinton administration, he explained, opened up the US broadband market by requiring competitive access to local services. But in 2002 the FCC issued its triennial review of the act, and granted ISPs the ability to limit access from digital exchanges to remote hubs.

The reasoning given was that this would encourage a more rapid build-out of faster connections, but it left smaller companies being forced to pay the telco's asking price for exchange access or build their own lines to the exchanges in metropolitan areas in order to connect their local markets.

"This occurred at around the same time as dotcom crash, money was getting very tight, and a lot of the competitive service providers in the US went bankrupt - there were thousands of them," Jasper said.

"The US is sort of a sprawling country, and it turns out that nationwide almost 50 per cent of premises are served from remote facilities, and so for a competitive service provider like us are unfeasible to reach."

The wonderful world of wireless

On the wireless side there are valid network congestion issues, the report argues, but these are less serious than portrayed, and capping monthly data use doesn't solve the problem of usage spikes.

Charging more for peak-time calls is much more effective at handling traffic, but not as profitable, the authors claim, and investing in more infrastructure would solve the problem completely. Throttling high data users would also work, but instead US wireless providers such as AT&T and Verizon moved to strict data caps and to charging "overage fees".

"Each is seeing record profit margins as a result of the new more expensive pricing schemes. These margins are increased by upgrades to LTE, which make it even cheaper for wireless providers to deliver data." 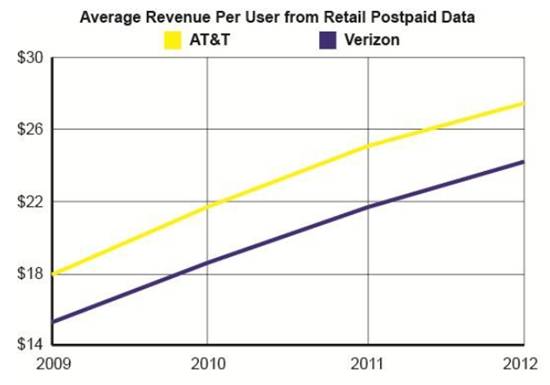 Monetizing your mobile use

As a result, the average revenue per customer has risen sharply, as have corporate revenues. Yet Sprint and T-Mobile still offer unlimited data, and aren't suffering from network congestion issues at all, the report notes.

There's also the practice of charging too much for basic services. SMS services are capped and priced, despite their tiny cost to send. It's not as though SMS is even an ISP invention; it was an engineering testing function left on handsets that customers discovered and started using of their own accord.

The logical solution to the wireless bandwidth issues is to build more infrastructure. The report notes that Japanese telco KDDI is building 100,000 Wi-Fi hotspots to integrate into its 4G network to ease data traffic, and users' smartphones can automatically shift traffic onto Wi-Fi without bothering the user. Such systems should largely solve current congestion issues.

Competitive pressures – or the lack of them – are once again playing a part. Locking of handsets, long phone contracts, and the difficulties of providing national coverage in such a big country all play a role in keeping the wireless market uncompetitive.

The current situation is harming US competitiveness, the report's authors conclude, and regulators need to enforce fairer competition and make sure companies aren't artificially creating scarcity to drive up prices.

"Investment in infrastructure will ultimately be a major driver of US competitiveness going forward. Rather than trying to curb consumer use and protect high profit margins on services over existing networks, it is critical that ISPs build for a future where the US can provide competitive speeds and pricing in comparison to its international peers," it finds.

"Furthermore, in order to ensure a fair marketplace for consumers, ISPs must be transparent and accountable about their network management and data caps practices. Without fair mechanisms for consumers to track their data usage, it is impossible for consumers to make informed decisions."

In this hack's experience when moving from the UK to the US, it's shocking how poor and pricey both wired and particularly wireless access has proven to be. In the latter case, the impact on the wallet involved in moving from the UK – one of the most competitive mobile markets – to the US has been severe, and a healthy dose of competition is desperately needed. ®