Members of the largest remaining group of Native Americans, the Cherokee, have built the first local language pack for Windows 8, just 27 years after the launch of the original Windows.

"The project started with Tracy Monteith, a Cherokee citizen in North Carolina who worked at Microsoft, who'd wanted it done for a long time but it didn't come together until recently," Cherokee Nation spokeswoman Julie Hubbard told The Register. "Volunteers translated over 180,000 words for the language pack over the last year and a half; it's the biggest project since the [Cherokee] translation of the Bible."

Where words had to be invented for modern features, the translators consulted with elders or ancient texts for reference points. Microsoft also developed a new sans-serif user interface font called Gadugi – the Cherokee word for "working together" – for the Windows 8 build, as well as for a forthcoming version of Office 2013.

Enthusiastic staff also built a phonetic keyboard layout for the language, working with a Cherokee typist named Skasdi (meaning awesome, powerful, or nasty) for his skills on the keyboard, to refine the design. 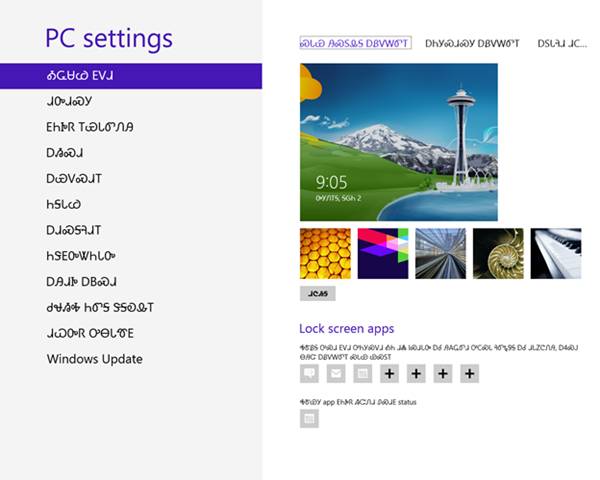 Key to the whole project was the extensive tribal efforts to preserve and maintain the Cherokee language, particularly among the group's younger generation. This involves special classes that children can attend, including technology modules, that are taught solely in Cherokee. Native speakers also tour districts maintaining language skills.

Thanks to these efforts, the Cherokee language has gone from being something no one under the age of 40 spoke conversationally a decade ago, to having over 3,000 fluent speakers, with the language increasingly being used in day-to-day conversations.

"Today technology is deeply integrated into our everyday lives – if that technology is not provided in the user's native tongue, then they will use whatever language is accessible to them," blogged Carla Hurd, program manager of Microsoft's local language program.

"That is why Microsoft believed it was important to work with the Cherokee Nation Language Team on creating access to our products in their language."

It's a little unfair to tease Microsoft about it taking this long to get a Native American editon of Windows. Since the launch of Windows XP, Redmond has put a lot of effort into catering for the world's diversity, building translated editions of its software in over 100 languages.

It is, however, lagging somewhat behind Apple in this case. Cupertino built a Cherokee version of iOS two years ago, and Mac OS has supported the language since 2003, again with the help of Cherokee Nation volunteers. ®