The money is moving up the stack, as always

The switching and server markets are loosely coupled, just like the machines themselves in the data center. When one goes up or down, the other tends to either lead or follow, depending on the technology transitions underway in both markets at any given time. The server market is in a bit of a slump, and the Ethernet switch market has followed suit.

As El Reg previously reported, server shipments were essentially flat in the second quarter, according to the box counters at IDC, and revenues fell by 4 per cent year-on-year to $12.2bn.

And, despite the transition to 10Gb Ethernet underway in data centers, Ethernet switch revenues at layers 2 and 3 of the network stack fell 4.4 per cent to $5.36bn. Some of that decline is competition, and some of it is penny pinching as some customers still think that 10GE server adapters and switches are too expensive compared to their gigabit Ethernet predecessors.

But not everybody feels that way, particularly customers who are building shiny new private clouds where the cross-server traffic of virtualized workloads almost necessitates a move to faster switching between machines and a flatter layer 2 network at that.

IDC reckons that sales of 10GE switches was up 10.7 per cent, pulling up the class average across all Ethernet switching, and that the aggregate ports shipped in the quarter rose by a very impressive 61.4 per cent to 3.5 million ports.

"The surprising decline in the Ethernet switch market after several quarters of positive growth is a result of several factors, but the highlight was that the slower growth in the 10GE core segment of the market could not completely offset the decline in the network edge/access segment," said Rohit Mehra, vice-president of network infrastructure at IDC, in a statement.

"10GE along with the emerging 40GE Ethernet switch segments are the ones to watch as growth in virtualized applications and converged infrastructure will continue to drive the need for advanced networks in datacenter build-outs." 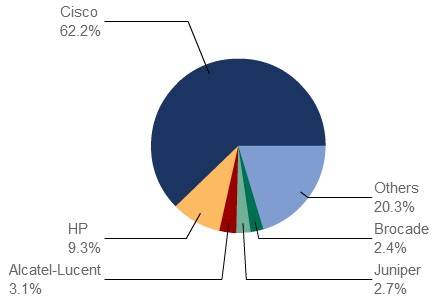 Competition in layers 2 and 3 is intense. This rivalry, particularly among server makers that have captive network divisions and are trying to unseat market leader Cisco Systems, is putting pressure on revenues, especially in the near-commodity gigabit Ethernet segment of the market.

Just like server makers have made a mad dash for network switch makers in recent years, expect switch makers to either build or buy their software-defined network (SDN) software stack. SDN senses what's going on in the network and shapes the traffic across switches and routers in real time to changing conditions; in a way, it allows the network to become self-governing.

IDC projects that $360m in SDN software, including OpenFlow controllers and virtual switches for hypervisors as well as OpenFlow-enabled switches, will be sold in 2013, and that this market will explode to $3.7bn by 2016. This SDN forecast not only includes hardware and software, but also any services that are used to implement SDN on the network.

There are many ways to skin the SDN cat, and Cisco and HP in particular are using a mix of existing code and OpenFlow standards to build out their SDN software stacks while others such as Big Switch Networks, VMware-Nicira and Pica8 are going the open-source route. The interesting thing will be how the quasi-proprietary SDN vendors attempt to preserve their switch sales through SDN sales.

It could turn out that having competitive and cheaper Ethernet switches is not the way to topple Cisco. (That would be what HP and IBM tried to do to take on Digital Equipment Corp in the early minicomputer market.) But rather a move to a completely open-source SDN stack becomes desirable and therefore drives a hardware sale, much as the Unix open systems and then the Linux open source movements shifted server buyers from proprietary to RISC and then to x86 server platforms.

Cheap iron was not enough to move people off boxes. But cheap iron plus open source software that was also cheaper did get many companies to move some apps and to do all new app development.

Then again, Windows Server is not open source and it accounts for more than half of server spending and the vast majority of shipments. Ubiquity and familiarity on the desktop drives server sales at small and medium businesses, as does the vast Windows application portfolio.

Open standards, open APIs, and open source matter a great deal to a lot of people, but not everyone and not for all workloads. We'll see if server history repeats itself in SDN. No matter what, it seems clear that this is where networking profits are going to come from. ®