Mark Zuckerberg doesn't know how to use HTML5

Open ... and Shut Even as Facebook dumps HTML5 to embrace native app development, calling its early enthusiasm for HTML5 its "biggest mistake," Sencha, a leading provider of open-source web application frameworks and tools, has not only demonstrated real-world readiness of HTML5, but has actually built a Facebook app that performs better than Facebook's native apps.

When a team has problems with HTML5, it usually stems from the fact that they take a “website” development approach to building an app, and often don't use the right tools and architectures for application development. This is what we suspected about the Facebook HTML5 app. The way that app performed — slow loading, choppy user experience in the News Feed, low framerate — exhibited the usual symptoms.

So Sencha decided to out-Facebook Facebook, and build its own version of Facebook as an HTML5 app, called Fastbook. The results, as can be seen in this video, are pretty impressive:

In fact, performance is good enough that Sencha is ponying up $20,000 for its HTML5 Is Ready App Contest. Build an HTML5 app and get entered to win lots of money. Not bad.

Sencha is convinced that 2013 is the year that HTML5 comes into its own. Perhaps. As a former executive at Strobe, an HTML5 company that Facebook acquired in 2010, I've seen both the possibilities and the limitations of HTML5. But it's clear that for all the limitations that Facebook may see, enterprises are creating real jobs for HTML5 developers to a surprisingly big degree: 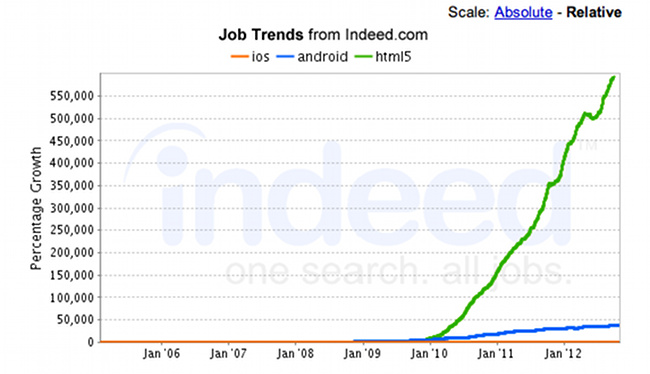 And if you look at relative HTML5 job growth instead of absolute job numbers, HTML5 is blowing both iOS and Android out of the water. Perhaps this coincides with the rise of Android, which is forcing app developers to work with both iOS and Android. This creates a great deal of redundant work, work that HTML5 can help to erase.

No, HTML5 is not perfect. But it's far more mature than Facebook's Mark Zuckerberg insinuated. As Forrester analyst Jeffrey Hammond declares, we are in a "golden age" of application development, and HTML5 frameworks like Sencha and Appcelerator are key parts of this, as well as tools like PhoneGap that bring native functionality to the web. It's a great time, in other words, to be a web developer again. It's not such a great time to bet against the web. ®