The top Tory took to the pages of the Daily Mail this morning to explain the climbdown on filtering by his government, a change of heart that was welcomed by the telecoms industry.

Oddly, the Mail rather generously heralded Cameron's comments as a "victory" for its campaign to force ISPs to censor web smut. The newspaper had envisaged red-faced Brits contacting their providers to ask for access to pornography blocked by default at the network level. Instead, parents will have to ensure they configure their internet connection correctly.

Cameron, clearly keen to offer some sort of concession to middle England, said folks who quickly click through their family broadband's filtering settings without paying attention would stumble into "a kind of 'default on' for houses with children".

This so-called "active choice" option is favoured by telcos and allows their subscribers to decide what level of filtering - if any - they want to apply to their individual service. TalkTalk is the only big name ISP to offer network-level blocking of websites using a system that has proved to be far from perfect. 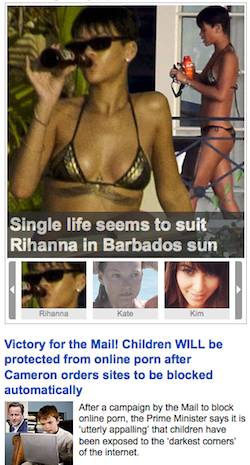 Although, Cameron appeared to indicate today that parents would be nagged into submission if they failed to safeguard their kids against the "darkest corners of the internet". He said:

Want to restrict access to Facebook after 8pm? Decide to allow younger children to view fewer sites than their older siblings? Or want to stop access to certain sites altogether? Now you will be shown how to do it.

To make this doubly safe, if parents just repeatedly click ‘OK’ to get through the filter set-up quickly, then filters against the most obvious threats – like pornography and self-harm sites – will be left on.

In other words, parents living with their children must remember to click on "no thanks" to filtering, otherwise their internet access will be restricted accordingly to block supposedly harmful material.

She'll be busy lobbying ISPs about keeping kids safe online even as the industry continues in its hands-off mode. ®