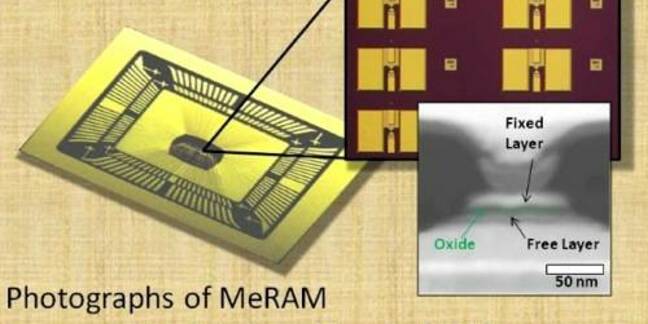 MeRAM has the potential to succeed NAND flash as the best non-volatile sold state memory with DRAM-like speed, better-than-NAND endurance and density, and now it has taken a step forward, with UCLA research making the stuff 10 to 10,000 times more energy-efficient.

UCLA boffins - led by Raytheon professor of electrical engineering Kang L Wang - worked out that the STT-RAM (Spin Transfer Torque RAM) implementation of solid state memory using electron's spin has density and energy limitations that could be side-stepped by using voltage instead of direct current, according to the UCLA release. The research is also backed by the hypersonic spaceplane-making, mad-tech supporting Defense Advanced Research Projects Agency (DARPA).

STT-RAM causes the spin of electrons to be directed either to the left or to the right and this spin state can be read. The spin state is then used to filter electrons as it gives them different resistance levels. The technology uses an electric current in its spin-setting operation (ie, when writing data), and this generates some heat. The UCLA boffins say this use of electric current restricts how close the bits can be to each other, which restricts the density of STT-RAM.

What the Kang L Wang boffin crew has done is use an electrical voltage, a difference in electrical potential, to write data - switch the magnetic bits - instead. This process generates less heat but the boffins cannot measure how much less, giving a pretty wide range of outcomes when it says its voltage-using process is "10 to 1,000 times more energy-efficient." 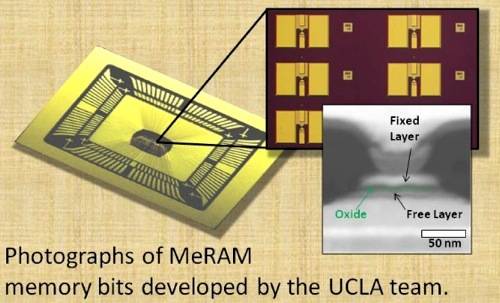 The new MeRAM technology, still described as spintronics, can now be five times more dense, enabling a lower cost/bit, say the boffins. Pedram Khalili, a research associate in electrical engineering and project manager for UCLA–Defense Advanced Research Projects Agency (DARPA) research programmes in non-volatile logic, said: "The ability to switch nanoscale magnets using voltages is an exciting and fast-growing area of research in magnetism. This work presents new insights into questions such as how to control the switching direction using voltage pulses, how to ensure that devices will work without needing external magnetic fields, and how to integrate them into high-density memory arrays."

MeRAM uses nanoscale structures called voltage-controlled magnet-insulator junctions, which have several layers stacked on top of each other, including two composed of magnetic materials. However, while one layer's magnetic direction is fixed, the other can be manipulated via an electric field. The devices are specially designed to be sensitive to electric fields. When the electric field is applied, it results in voltage — a difference in electric potential between the two magnetic layers. This voltage accumulates or depletes the electrons at the surface of these layers, writing bits of information into the memory.

Wang pressed the energy-efficiency button in a comment he made: "[MeRAM] can enable new instant-on electronic systems, where memory is integrated with logic and computing, thereby completely eliminating standby power and greatly enhancing their functionality."