There's a new official iphone out this week, but it's only available in Brazil and it doesn't run iOS 6, the latest incarnation of Apple's smartphone OS. In fact, it runs Android.

The Associated Press reports that Brazilian consumer electronics maker Gradiente has begun marketing a device under the iphone brand after being granted the exclusive right to use the trademark in Brazil through 2018.

The trick, the company says, was in filing its application with the Brazilian trademark office long before Cupertino ever released its first smartphone.

In a statement, Gradiente said it applied for the mark in 2000, after realizing "there would be a technological revolution in the world of cellphones with the convergence of voice and data transmission and reception via mobile Internet."

Not that Gradiente's iphone is itself all that revolutionary. The device, which retails for 599 Brazilian Real (around $291/£179) and bears the rather tongue-twisting designation "Smartphone linha G Gradiente iphone, modelo Neo One GC 500," appears to be the same thing as an earlier model that Gradiente marketed simply as the Neo One GC 500. The only thing that has changed is the branding. 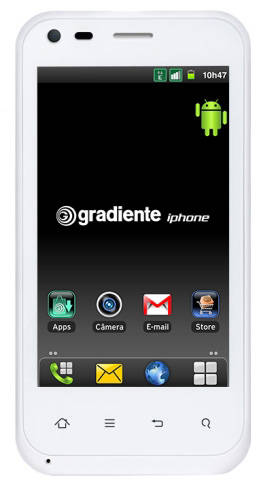 Yes, but how are its maps?

That means Gradiente's kit is no competition for the genuine Apple article. If it were released in the US market, the Neo One GC 500 would be nothing more than a bog-standard low-end Android phone.

The device is a 3G UMTS mobile based on a 700MHz single-core ARM processor with 2GB of RAM running Android 2.3.4 "Gingerbread". At 320-by-480 pixels, its touchscreen is hardly a Retina Display, and it has no multitouch support. Throw in a predictable assortment of humdrum features and you've got one seriously uninspiring smartphone. It does support dual SIM cards, but that's quite common in developing countries.

It seems likely the pre-rebranded Neo One GC 500 wasn't winning over many Brazilians. Gradiente says it held off on using the iphone brand until now because it was waiting to "conclude a corporate restructuring process that ended earlier this year," but the move seems more like a last-ditch attempt to sex up its product marketing.

Now that Gradiente has rolled out its first iphone-branded kit, however, it seems determined to keep up the practice. "In Brazil, Gradiente has the exclusive right to use the iPhone brand," the firm's statement said. "This company will adopt all the measures used by companies around the world to preserve its intellectual property rights."

Of course, Apple is known for doing the same, and its pockets are much deeper than Gradiente's. When asked about that, an anonymous Gradiente exec told AP that the company hadn't heard from Cupertino on the matter and that she didn't know whether Apple would try to stop Gradiente from using the iphone brand.

Note, though, that Apple styles its iPhone brand with an uppercase P, while Gradiente renders the word all in lowercase. It's not much of a distinction, perhaps, but it does suggest that Gradiente's claim to the brand may have been made with fingers crossed. ®