The demonstrators, wearing Santa Claus and elf hats in the spirit of the holiday season, arrived at Boston's Prudential Center shops during a planned "TechTots" children's event at the Microsoft Store, accompanied by a man dressed as a gnu, the FSF's horned mascot.

The freedom-loving wildebeest proceeded to exhibit behaviors not normally observed in the Serengeti, including handing out stickers and discs containing free software (don't call it open source), along with copies of the FSF's holiday giving guide, which suggests alternatives to gifts that the group says come with too many restrictions.

The demonstration was staged as part of the FSF's ongoing campaign against Windows 8, which the group claims is even more restrictive than previous versions of the OS, yet has been backed by a marketing campaign "rumored to have cost more than a billion dollars."

"Tablets and laptops are popular gifts for the holidays, but people often overlook the restrictions that manufacturers slip under the wrapping paper," explained FSF executive director John Sullivan in a statement.

The FSF's protest was cut short, however, by the arrival of security, who asked the demonstrators to leave the premises. The gnu, though a powerful mammal, is naturally cooperative and migratory, and it departed without incident. 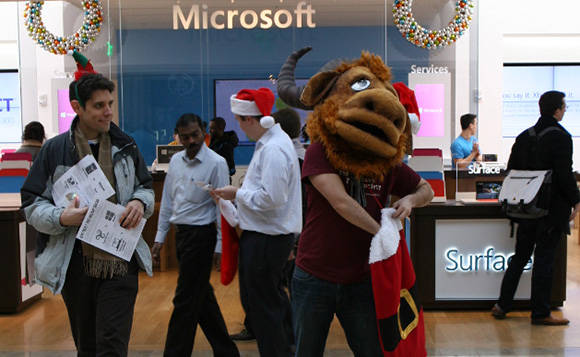 In its natural habitat, the wildebeest is a relatively docile creature that enjoys grazing and
compiling software from source, yet is easily startled by DRM and proprietary licenses.

According to FSF campaigns manager Zak Rogoff, the fact that the demonstrators were escorted off only underscores the FSF's message:

We were prepared for the Microsoft store to ask us to leave. Our Windows 8 campaign is reminding Microsoft that many software users do care about their rights to run a free "as in freedom" operating system, and will not tolerate digital handcuffs. Microsoft's business model is predicated on these handcuffs, so they don't like what we're doing. If more people knew that free software was an option and had a chance to try it, this store would have a different logo over the door.

Thursday's protest was actually the second demonstration the FSF has staged against Microsoft, the first having taken place during the Windows 8 launch event in October. The group said to expect further such actions "in coming months." ®