Atom can't tell up from down in 'quantum spin liquid'

A state of magnetism predicted in 1987 has been observed for the first time at MIT, with researchers saying that it might one day find applications in storage and communications technologies.

The “one day” is still quite some way off, however, with the researchers only at the very beginning of observing the properties of what’s called a “quantum spin liquid” (QSL).

The properties of a quantum spin liquid are revealed in the spin properties of atoms in a crystal. Rather than settling into a stable state, as happens in ferromagnetic and antiferromagnetic materials, the “spin moment” in a QSL is constantly changing. 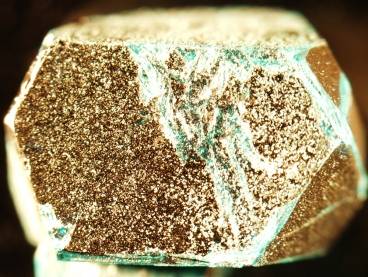 In the familiar compass needle, magnetism comes from the alignment of all spins in the same direction. The second magnetic state, antiferromagnetism, was first proposed in the 1930s. In an antiferromagnetic material, the spin states align in such a way that the overall magnetism is zero, unless energy is applied. This property is exploited in hard drive read heads.

In the new state of magnetism, the magnetic orientation of particles is unable to settle into an ordered state. Instead, they fluctuate constantly, driven by quantum interactions between particles.

QSL only exists in a type of crystal called a kagome lattice. In the material examined in the MIT research, Herbertsmithite (named after its discoverer), copper atoms lie at the corners of triangular structures. Two of the copper atoms are able to align their spins in an “up-down” arrangement – but the third copper atom can’t align with both the others, so it flips between up and down.

The blue regions in the NIST scan of Herbertsmithite show magnetically ordered regions. The green regions are exciting: they're where the spin state is disordered. Image: NIST

To actually observe the QSL, the researchers spent years manufacturing high-purity Herbertsmithite. The test sample was then imaged using the Multi-Axis Crystal Spetrometer (MACS) at the NIST Center for Neutron Research.

In a disordered material, neutrons scatter evenly across the sample. In the QSL sample, some regions scatter neutrons in a way consistent with magnetism – but in other regions the scattering appears disordered (those regions where the atom’s spin fails to settle down).

Along the way, the researchers made another possible discovery as significant as the QSL: they believe they’ve observed fractionalised quantum states.

Quantum states are generally assumed to exist only as whole numbers – after all, the basis of quantum physics is that the quantum is the smallest possible change in state that can exist.

The MIT researchers say that their material exhibits a state with fractionalised excitations: “spinons” whose excited states apparently exist in a contiuum between quantum states. In the MIT release, the researches say observing this “highly controversial idea” is “a remarkable first”.