Google has taken two steps to prevent its Chrome browser becoming an attack vector for malware that runs as extensions to the browser.

Like many other browsers, Chrome allows users to install “extensions”, apps that add functionality. Google even runs the “Chrome Web Store” to promote extensions.

Security outfit Webroot recently pointed out that some of the extensions in the store are illegitimate, data-sucking privacy invaders that trick users with offers to do things like change the colour of Facebook and then suck out all their data.

Google has responded in two ways, one of which is a new service “To help keep you safe on the web” that will see the company “analyzing every extension that is uploaded to the Web Store and take down those we recognize to be malicious.”

Changes are also coming in the forthcoming version 25 of the browser, which will no longer allow extensions to install without users’ knowledge. That’s currently possible because Chrome, when running on Windows, can is designed to allow unseen installs “to allow users to opt-in to adding a useful extension to Chrome as a part of the installation of another application.”

“Unfortunately,” Google now says in a blog post, “this feature has been widely abused by third parties to silently install extensions into Chrome without proper acknowledgement from users.”

Chrome 25 will therefore remove the auto-install feature, replacing it with a new system that presents the Windows Vista-esque screen below when extensions try to ingratiate themselves with the browser. 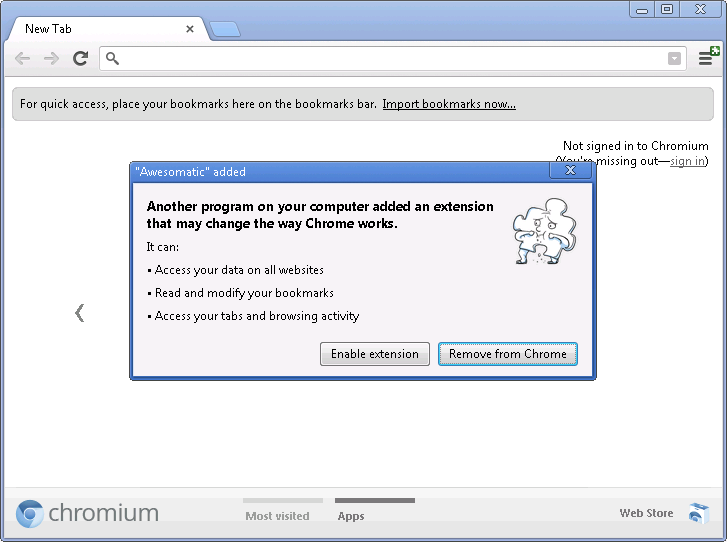 Hi! I'm the ghost of Windows Vista! Would you like to install this extension?

As ever, Google’s blog posts and support notice on the changes position them as responsible enhancements that show, yet again, Google is doing the world a favour.

A more critical analysis could consider the announcements in light of malware found in Google Play and take Google’s decision to more aggressively curate the Chrome Web Store as an admission it needs to devote more attention to this stuff, lest Chrome and other Google products become malware-ridden quagmires that users don’t trust. ®