Feeding the 10Gbit monster To build storage capable of running tests that can challenge 10Gbit network cards and switches, a flash array is required. I chose eight Kingston Hyper X 3K 240 SSDs to provide this high-speed storage layer. Before I built my VMware cluster of ultimate doom, however, the SSDs needed some torture testing.

The drives advertise themselves as running somewhere north of 500MB/sec for reading and writing data. If you venture over to Tom's Hardware and take a look at the performance charts for 64-bit queue depth, you'll find the measured performance is significantly slower: 217.81MB/sec write and 187.61MB/sec read for random accesses. Let's see if they stack up.

I didn't pay a great deal of attention when actually ordering the drives and ended up getting Kingston upgrade kits along with the drives. Each came with 2.5" to 3.5" mounting rail as well as a 2.5" USB chassis. They also came with a small magnetic screwdriver that became high demand items around the lab and instantly disappeared. The kit also comes with the software required to do migrations; in short, everything you need to migrate from your existing hard drive to the new Kingston SSD.

The SSD itself feels well-built. It sits in the hand like a solid hunk of metal and doesn't have the cheap plastic feel I've come to expect with so many other consumer drives. The screwdriver that ships in the upgrade kit is similarly impressive: it feels like it should be some form of ammunition instead of merely a screwdriver.

I have less nice things to say about the 2.5" USB chassis. In theory, laptop users can use the USB chassis to turn their old drive into an external drive and continue using it. In reality it is a cheap piece of plastic and the first one lasted exactly 6 hours before it disintegrated. It is enough to get your data migrated, or serve very light duty as an on-desk external drive. It is not well built enough to handle prolonged testlab use, let alone serve road warriors.

The Hyper-X SSDs perform as expected. After having fully preconditioned the drive, AS-SSD rates the sequential read speed on these drives as a hair over 500MB/sec; within a hair's breadth of the marketing on the box. The write speed in AS-SSD is a little over 300MB/sec. 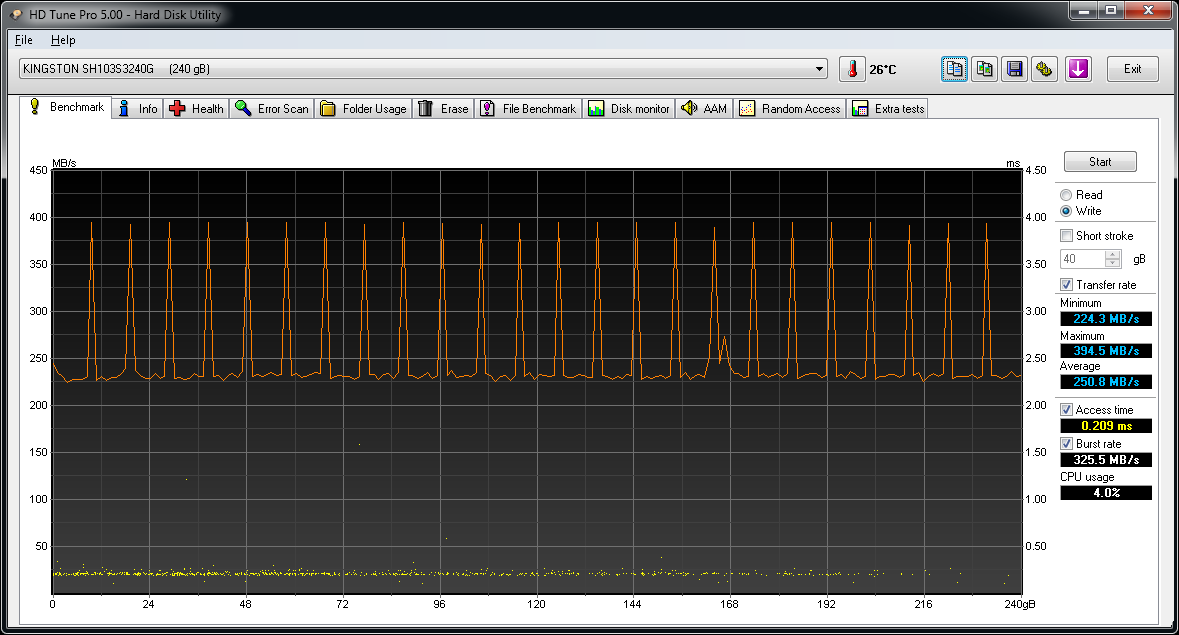 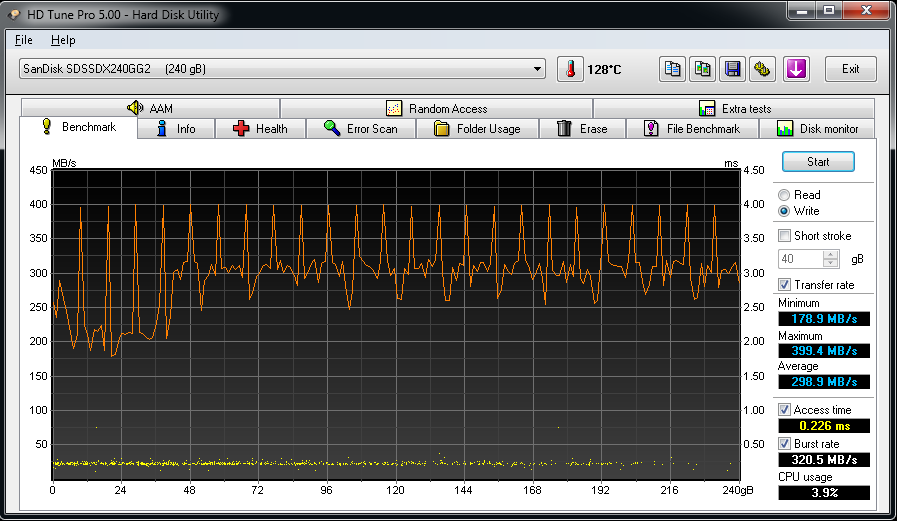 I compared this to a Sandisk Extreme 240GB SSD. The Sandisk returned a higher average write speed – almost 300MB/sec – but the performance was not nearly as stable as the Kingston. The write speed jumped all over the place and no matter how hard I preconditioned the drive – or which applications I used to test – the beginning of the write tests were always reported a significantly lower write speed than the average over long transfers.

The Hyper-X clearly slaughters my random sampling of spinning rust. The Sandisk has the benchmark-friendly IOPS at the small transfer sizes, but an unstable response that makes me very nervous. I didn't see any real-world advantages to the Sandisk in any of my real world tests, and the nice flat response line in my tests makes it far easier for me to trust the Hyper-X.