Video games are believed by many to be a waste of time - but this is something consistently being challenged by the people who love them. And despite the fact that video games just can't seem shrug off the label of "just for kids", new research (PDF) would suggest that you're never too old for them.

And as the debate over the supposed link between video gaming and addiction and aggression rages on, some video gamers, developers, entrepreneurs and advertisers are seeking to cash in on the serious business (PDF) of video games in an unexpected way.

eSports (short for electronic sports), otherwise known as competitive gaming, is playing video games for prizes, pride and profit. The logic is the same as in traditional sport, yet the medium is entirely different. eSports competitors plug in their mice, keyboards, controllers and arcade sticks and battle for supremacy both on and offline.

eSports games are played on nearly every platform imaginable, led primarily by the PC and Xbox. Other platforms, such as Playstation 3, Nintendo Wii and even mobile phone gaming have found their way into professional circuits. The most popular titles are currently League of Legends (PC) - a Multiplayer Online Battle Arena (MOBA) game with 32 million players - followed by StarCraft 2 (PC) - a real-time strategy game with over half a million players.

Other popular competitive titles include Halo 4 (Xbox), the Call of Duty series (Xbox, PC), CounterStrike: Global Offensive (PC), Super Street Fighter 4: Arcade Edition (Xbox, PS3), Ultimate Marvel vs Capcom 3 (Xbox, PS3), and Tribes: Ascend (PC). Each of these games has its own players, teams, events, tournaments and communities. In fact, competitive gaming has become so popular that even a game that's still in development - such as Shootmania Storm (PC) - can be capable of attracting an eSports community. 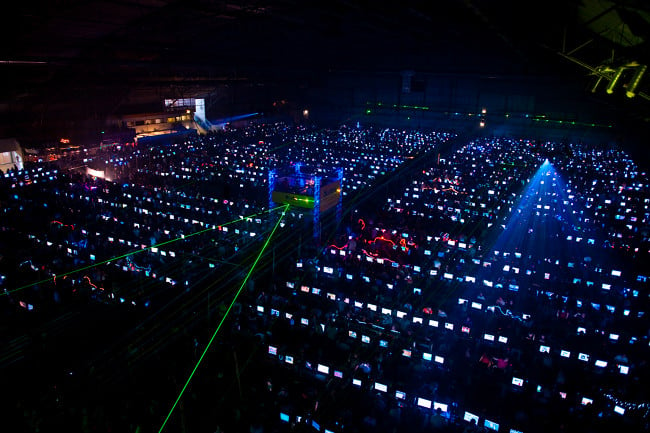 The origins of modern eSports can be traced as far back as the 1980s, with a Space Invaders tournament that saw over 10,000 competitors. Throughout the '80s and '90s, eSports continued to evolve with Nintendo games such as Pac-Man, Donkey Kong, Tetris and Super Mario. This culminated with the Nintendo World Championships, a tour that crossed 27 cities in the United States, awarding a single victor in three separate age groups a free trip to Universal Studios Hollywood and the chance to compete in the grand finale.

As internet connections and home PCs became more and more common, iD Software's Doom and Quake saw much play online. This fostered the creation of online gaming communities and clans, as well as offline events such as the infamous 1997 Red Annihilation tournament where Dennis 'Thresh" Fong won legendary software programmer John Carmack's Red Ferarri 328 GTS Cabriolet after beating Tom "Entropy" Kizmey in a match of Quake 1. Fong put on his entrepreneur hat and went on to create Xfire after his Quake career, a gaming communication tool used by millions of gamers today and Raptr, a gaming social network a few years later.

By the turn of the millennium, eSports was growing fast. Million-dollar events were taking place, professional gamers & personalities were turning into celebrities in their own right, and the community was expanding rapidly. However, 2007 and 2008 saw one of the largest economic declines since the Great Depression and when the effects cascaded through the entertainment industry. eSports was not spared.

Sponsors pulled out to conserve funds, tournament circuits were forced to shut their doors and players moved on to more traditional work. The few steady, permanent jobs that existed in eSports evaporated. For years afterward eSports remained relatively stagnant, kept alive mostly by the passion of the amateur competitive gaming community and a handful of organisations that survived.

That same passion gave eSports new life when StarCraft 2: Wings of Liberty went into closed beta in 2010. A significant percentage of the consistently sought-after male 18-34 demographic had played StarCraft while growing up and there was an immense amount of hype surrounding the sequel. Community efforts such as the HDH Invitational demonstrated that eSports was back on the rise. A year later there were multiple games competing for the title of "most popular eSport". Dozens of different tournament circuits and waves of both new fans and players were now entering the scene, injecting money by purchasing merchandise, watching live broadcasts, and viewing advertisements.

Unlike the previous attempt a decade earlier, in 2010 a true industry started to form. Players, developers, sponsors and entrepreneurs studied the failures of the past and learned from them. Players once again began forming teams that practised together regularly and sought sponsorships to attend events. New vendors sponsored more events, contributing to prize pools and attracting more players. Teams evolved into marketing agencies, paying their players salaries so they could practice for eight or more hours a day; businesses began creating newprofessional gaming-grade peripherals to give players an edge. Tournaments evolved from small LAN parties to massive conventions with tens of thousands of attendees, dozens of sponsors, and hundreds of staff, broadcast live via the internet and/or TV to a worldwide audience.

Next page: So you wanna be a playa?
Page: