Dev studios looking to develop an eSports title need a game that is exciting, relatively easy to understand (the blue guys blow up the red guys), is accessible (free to play/"freemium" model or one-time buy-in), and needs an infrastructure that supports it (private matches, spectator tools, overviews, etc). Bart "HiRezBart" Koenigsberg, eSports community manager for HiRez Studios, maintains that there is value for developers in engaging with the eSports community: "[Our] eSports initiatives clearly are working because [they] haven't given up yet."

Game dev studios are supporting eSports initiatives by investing in tournaments and events (often as a loss-leading marketing exercise), integrating third-party functionality into their game (embedded live streams within the game client, for example) and working with members of the eSports community to balance games and solve critical bugs which would otherwise prevent uptake on professional circuits.

Riot put up $5m in prizes for its League of Legends Season 2, gaining over 1 million live viewers worldwide, and cementing its position as one of the dominant entities in the modern eSports landscape. Riot has enjoyed a particularly successful relationship with eSports; its continued engagement with the community has led to refinements in the game that have increased uptake. The increased uptake has in turn dramatically increased revenues and exposure.

The rising importance of eSports is part of a larger challenge facing game developers. Just as the job of systems administrators is now as much about dealing with people as technology, developers no longer operate in a vacuum. While game devs facing a design feedback loop between developer and player, dev studios are increasingly turning to the community more directly for start-up funding.

Obsidian Entertainment has raised over $3.9m for Project Eternity through Kickstarter, Double Fine managed a little over $3.3m. They are both beat by Android console hopeful Ouya, which raised a hair over $8.5m. These ventures do not always end successfully.

eSports communities are as diverse as any other - and understanding their culture, memetics, digital haunts and motivations takes a lifetime of immersion. eSports communities exist primarily online; popular websites include Reddit's r/starcraft and r/leagueoflegends, TeamLiquid, avid users of social media. 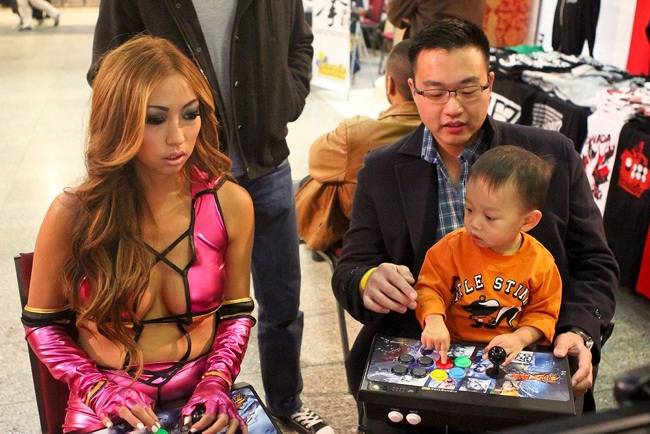 A young cyber athlete battles a cosplay model during Canada Cup 2012 at CosPlay 2012.

As in traditional sports, eSports communities attract the virtuous as well as the idiotic. Sexism is a problem among video gamers, despite the growing popularity of professional female gamers and female pundits with all the geeky bona fides.

The eSports community has a sense of vigilante justice about social issues, emailing sponsors directly to get people fired, suspended and so forth. The morality of these "witchhunts" is as hotly debated a topic as are the bigoted remarks and actions that trigger them. The eSports community also has a reputation for positive initiatives, demonstrating that pigeonholing communities measuring in the millions is as difficult in the digital world as it is in the real one.

Why we do it

Both of the writers of this piece have been involved in eSports in various capacities for years. In that time we've experienced people participating in various video gaming communities for every reason imaginable.

We have close friends who play video games as a means of exploring human interaction in a safe environment, free from fears of rejection or ridicule. One particularly notable example is a positively gregarious and outgoing person when placed in front of a keyboard; humorous, thoughtful, evocative ... and virtually mute when spending time with his friends in the real world.

Others are driven to video games - and eSports more specifically - for the thrill of competition. Some wish to be the competitors; to crush their opponents and see them driven before them. Still others wish to be part of something larger than themselves, to cheer on the home team and mock the fans of rivals.

The camaraderie built within video gaming communities is no different than that of more traditional sports. Your writers met at a LAN party - several in sequence, over the years - and forged a lasting friendship as a result. Josh Folland was best man at Trevor Pott's wedding; we've also started a business together. Trevor Pott met his wife through friends from a LAN party... We can both list many other relationships that can be traced directly to local LAN events.

LAN parties in general - and the larger tournaments and eSports events more specifically - are exciting, fast-paced affairs that rival other entertainment events. They are also rarely just about the video games; we've participated in tournaments for everything from paper airplane making to who can hang from a wall the longest.

Professional gamers - especially in South Korea - are treated like rock stars - and yes, there are groupies.

There are also internet stalkers, streams of hatred on Twitter and webpages dedicated to trashing you out of pure jealousy. For those making a serious go of it, being a professional gamer is hard work. For an industry this young, it is often the friends you meet along the way - not the money that may or may not materialise - that make the incredible stress and effort worth it.

Next page: The road to relevance
Page:
Tips and corrections
24 Comments