Feeling poor? WHO took all your money? NOT capitalist bastards?

Actually it was nurses and firemen and teachers

Comment Lies, damned lies and statistics: we all know the saying, but you'd be surprised just how many of these “facts” manage to enter the national consciousness, emerging as Guardian headlines and stories on Radio 4's Today.

Allow me to tiptoe through the process as to how this happens. 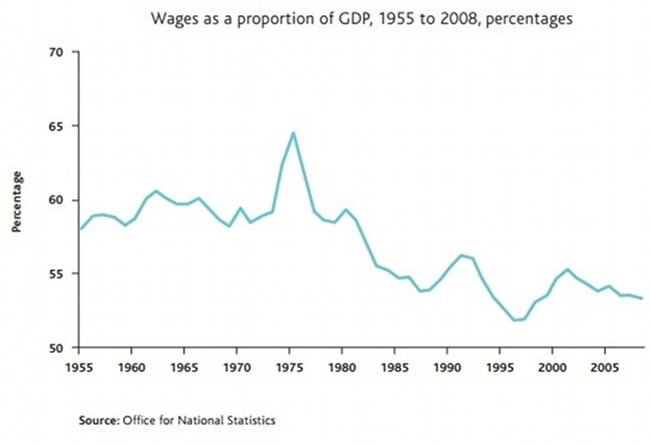 Chart 1 - Down the slide

As you can see, the workforce's share of the nation's economic output has been falling. Clearly a bad case of the capitalist bastards watering the workers' beer. And that is indeed how the TUC portrays it in this paper (PDF).

If the workers' share is going down, then obviously profits - the amount the capitalists are getting - is going up, right? The TUC uses the same idea about a year later in another report (PDF). This time they call it the "wages share" (they're wrong) but they're running with the same idea: the fall in the labour share means the capitalists are watering the workers' beer again.

And in that they're wrong as well. But that doesn't stop them from saying that this is at the heart of all our ongoing economic hardship in the post-2008 gloom:

This wages squeeze was a prime – or should we say sub-prime – cause of the crash. Excess profits and bonuses went into the finance system rather than new investment. Workers deprived of proper pay borrowed to make up the difference. And when bankers stopped considering risk before lending, we had started the inevitable slide to the global crash.

Of course the wage share of the economy will change from year to year. But for thirty years after the Second World War it was relatively constant. In the 1970s during the oil shock and high inflation it was arguably too high, but then fell back. That is why we have taken 1980 as our starting point. That is also when we started the three decades of deregulation, growing inequality and letting the market rip that led to the crash.

It was when governments stopped caring about industrial policy or balancing the economy. And when the cult of the "private sector knows best" began.

You get the narrative I think. As the labour share falls, the profit share rises and the economy entirely goes to pot.

There is though, deep down in the bowels of these economic statistics, a problem with the story. The problem is, in short, that it's bollocks. The profit and labour shares are not their inverses: the two together do not sum to 100 per cent of the economy. Thus the fall in the labour share may or may not have led to a rise in the profit share. Which makes the rest of that narrative the aforementioned dangly hairy bits. Great big'uns, too.

What they are actually looking at is GDP. That's the output of the economy. We can measure it as output (that's the number we normally see), or we can measure it as incomes. The two should be the same but they never are because people lie, usually about taxes. The differences are small though. However, when we use the income approach we do not have just labour and profit shares. What we in fact have is the following:

Wages and salaries + employer-paid taxes on employment = the labour share

All of you are much better at maths then I've ever been so you can immediately see that a decline in the labour share does not necessarily mean a rise in the profit share. As is in fact the case here.

For here are the four laid out for you: 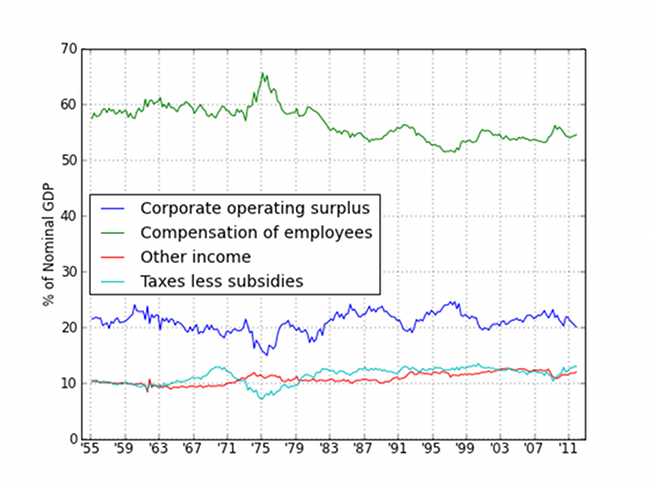 As you can see, there's a collapse in the profit share in the 1970s but after recovering from that it settles, more or less, on its long-term average.

This next chart is also interesting, about the bits inside the labour share. 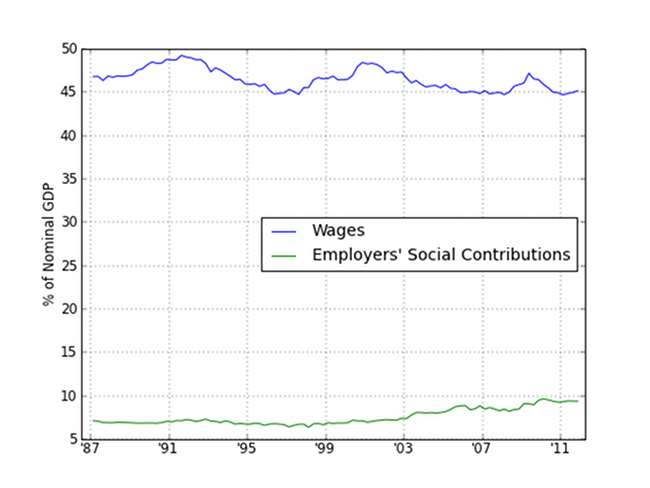 Next page: So why is your pay cheque shrinking?
Page: