Hey, cloudy tech vendors on Amazon: AWS can fluff you up

And not in a good way

Open ... and Shut Mobile consumed much of the media's attention in 2012, with Apple duking it out in court and in the market with Android. But it was Amazon, perhaps more than any other company, that spent 2012 redefining how we think about technology.

In late 2011 I called out Amazon as "the Microsoft of the cloud", pointing to its emerging role as the operating system of the cloud. Like Microsoft, Amazon has steadily added to the services it includes in its base product, Amazon Web Services. And like Microsoft, it's sometimes hard to determine whether Amazon is your friend or enemy.

In most cases, it's both.

That is, if you're a technology vendor. After all, Amazon added an army of new cloud services in 2012, from Redshift, a petabyte-scale data warehouse service, to Glacier, a storage service for data archiving and backup. These are but two of the dozens of updates and new services Amazon made to Amazon Web Services (AWS) in 2012, each one promising the extinction of startups that built in its shadow, and new hope to other startups eager to build on its low-risk infrastructure.

However, the group that is likely to get hit hardest by the Amazonification of software is the big, established vendors. You know, the same vendors who scoff that real enterprise workloads will never move to the cloud.

But as Forrester analyst Michael Barnes highlights, Amazon is offering convenience at a price point that such vendors are unlikely to be able to match:

[W]hat really struck me at this event was how unique AWS’s overall position still is among enterprise IT infrastructure providers….Executives at the event admitted to seeing increased presence of competitors selling similar infrastructure as a service (IaaS) offerings but claim that it’s mostly traditional on-premise infrastructure providers pushing private clouds. This remains true for one major reason – cloud economics still aren’t appealing to most IT vendors, who gain far more benefit from selling traditional on-premises infrastructure in large enterprise deals via high margin upfront license costs and ongoing maintenance fees.

In contrast, AWS is actually doubling-down on its self-defined mandate to operate as a high volume low margin business….AWS is clearly attempting to further disrupt traditional IT market economics and force on-premises infrastructure providers to adapt….

While these "cloud economics" may not be attractive to established IT vendors, they absolutely are attractive to IT buyers, which is why this Forrester survey of IT executives should give vendors pause: 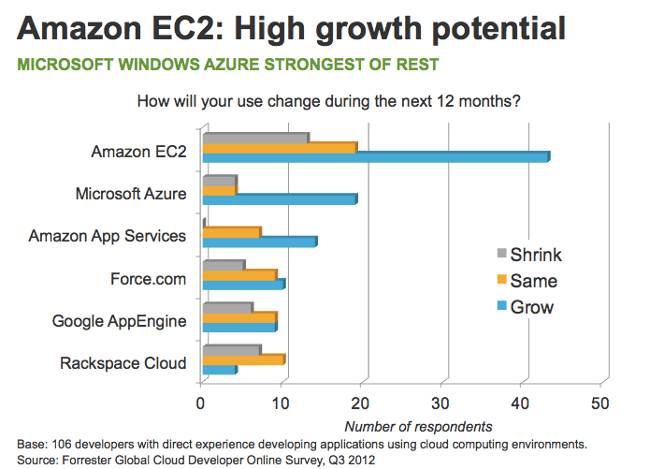 In fact, every IT vendor except Microsoft should be concerned by this chart, because they're not even a consideration in this new cloud world. At least, not in this survey, which tried to capture the major Infrastructure as a Service providers. IBM and Oracle show up as a rounding error. Only HP, at 5 per cent, shows up when asked which cloud environments survey respondents expect to try in the next 12 months.

If you look at the big trends set to shape 2013 (pick whichever list you want, but I'll start you with two from Rieva Lesonsky and Alex Howard), you'll see cloud undergirding many of them. The heart of cloud computing is Amazon, whether we like it or not. Largely it's driven by convenience. But it's also driven by Amazon's aggressive price discounting.

Either way, we all live in Amazon's world now, a frenemy if ever there was one. Today that feature you build to run on AWS? Tomorrow Amazon will release its own, and your business is toast. The only way to simultaneously partner and compete with Amazon is to build something that everyone wants (branding! trademark!), whether running on AWS or in the data center, but that Amazon can't or won't own (copyright!). Microsoft does this with Sharepoint. Eucalyptus seems to be doing this with its hybrid cloud offering.