You know EVERYTHING about me, but can you show relevant ads? Nope

That's very, very Big Data. It's a pity, therefore, that we currently analyse a mere 0.5 per cent of it all.

Not that all of these data are useful. IDC expects that by 2020, just 33 per cent of the world's data will be useful if analysed. But the delta between today's 0.5 per cent of actually analysed data and 33 per cent that could be useful if analysed is unlikely to get dramatically better. We like to think of ourselves as hyper-analytical, what with our quantified selves and "measure everything" approaches to business.

But, as I've argued before, we're actually quite inept at analysing data, be the data big or small.

Not only are we bad at regulating our intake of information, to paraphrase Nick Carr, but we're also really bad at separating signal from noise. In hindsight, we think we see clearly, but even then we tend to miss the point.

Despite a world awash in data, just consider just two failings to analyse these data properly:

Ironically, IDC calls out surveillance footage and social media as two of the best opportunities to apply Big Data. Perhaps things will get dramatically better by 2020, but it feels like the technologies we use to analyse our data tend to be backward-oriented, rather than real-time. This is changing, with the advent of Apache Drill and other technologies, but perhaps the real focus should be on highlighting what is happening, and then letting business managers intuit from these trends what they should do.

Compounding the problem of volume is where that volume is shifting - emerging markets: 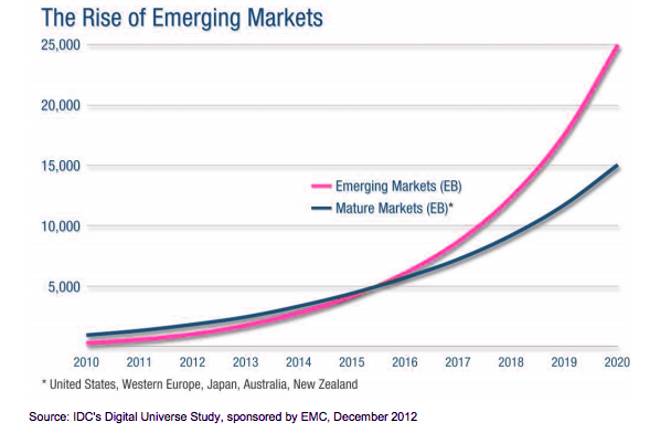 Importantly, the areas with the most data to analyse are planning to spend the least amount of money to do so. So while the US will spend around $1.80/GB and Western Europe $2.50/GB to manage Big Data, China (~$1.30/GB) and India (~$0.95/GB) are much lower. As IDC notes, this disparity can partly be explained by differing economic conditions but "also represents differences in the sophistication of the underlying IT, content, and information industries — and may represent a challenge for emerging markets when it comes to managing, securing, and analysing their respective portions of the digital universe."

Open-source data solutions will help to lower the costs of Big Data storage and analysis for all regions, but the far bigger problem is still knowing what to do with all these data. We still don't have much of a clue. Will we become dramatically better at managing our data by 2020? What do you think? ®