Drobo B1200i: The heavy-duty array even your mum could use

It sure looks pretty, but can this storage box cut the mustard?

Review Drobo has jumped in to the enterprise storage market with the B800i and the B1200i iSCSI appliances designed to be the simplest devices of their kind. For the past month, I have put the larger of the two - the 12-disk Drobo B1200i - to the test.

It has both served in my test lab and been pressed into production; I've tormented it with workloads both synthetic and real. Let's take a look.

What's in the box

The drives for the unit all arrived individually packed; with the Drobo's various components packed in some nice custom foam. The Drobo itself was in a cloth bag emblazoned with the Drobo logo; it's not quite Apple-esque packaging, but there is quite a bit of "ooh, ahh" to the unboxing experience. Someone at Drobo paid attention to Apple's marketing machine and learned a few tricks. As to the quality of the packaging; the various components survived Edmontonian couriers, so I suspect they'll survive shipment anywhere.

The Drobo B1200i is a 3U rackmountable disk array. It is about the same size as any other 3U disk array, but sexier. It has nice rounded edges and a cute magnetically attached front cover. It's a nice looking unit; I wouldn't be embarrassed at all to having it sitting out where customers can see it. Considering that Drobo tends to target creatives and small businesses who may not have racks - and thus may have this unit out for all to see - the aesthetics of the device makes sense. The aesthetics were somewhat offset by the fact that the unit's fans are loud. It lasted less than a week in the test lab before it was banished to the server room.

The rackmount "kit" for this unit doesn't contain rails. It is simply a pair of heavy-duty ears that attach to the unit; Drobo expects you to mount your storage array to the rack with only four screws. I have to admit to a lot of nervousness over this. While it seemed to attach just fine at first blush, I have to admit to chickening out and putting the device on the bottom of the rack. At least there it wouldn't take out servers below should the screws give out.

There's a dual-redundant PSU, and three expansion slots for add-in cards, though I'm not sure what you can populate those slots with. The unit comes with 3x 1Gbit iSCSI ports and a dedicated Gbit management port. It claims an operating temperature of 10°C through 35°C which I can verify. The cooling fans are hot-swappable as well.

To make the Drobo work, you need to use the Drobo Dashboard management software; a chunk of code with which I have developed a bit of a love-hate relationship. The management software is available for Windows and Mac OS X. It is exceptionally user friendly and intuitive for the uninitiated. Click around a picture of your Drobo to find the status of things. Create LUNs with a few easy clicks and get your capacity readout as an easy to understand circular graph. 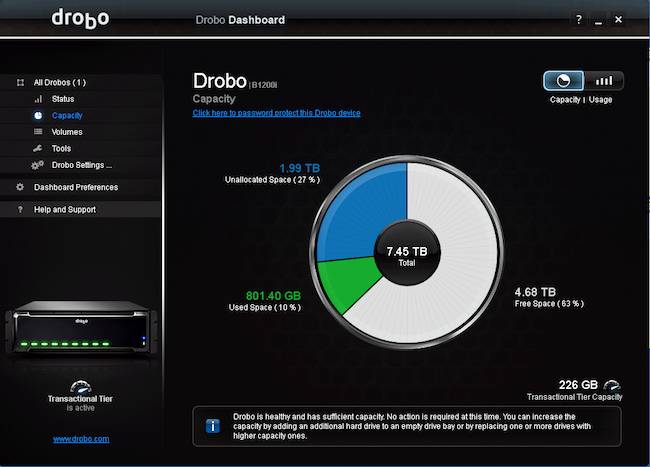 For me - with my Linux desktop - this meant using the software from inside a Windows virtual machine. More to the point, it meant using it from within a Windows VM that I was RDPed into from another Windows VM. This is a problem; being a graphics-heavy UI, dragging the change bitmaps across nested RDP sessions made working with the interface frustrating and slow. 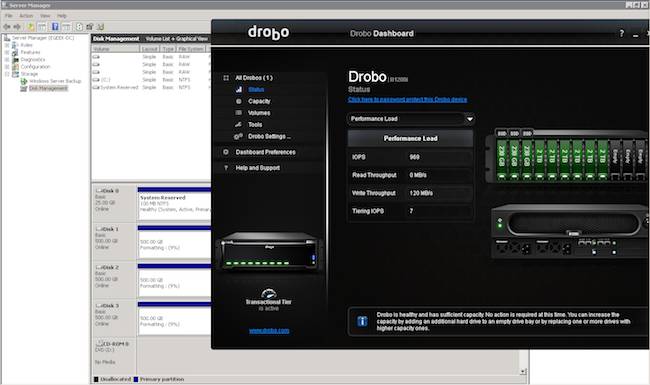 That is, however, a minor complaint. In real world usage you aren't going to be spending a lot of time staring at the Drobo Dashboard. You'll pop into it on the rare occasion you need to make a new LUN, but otherwise, the unit just sits there and works. If you aren't using it from within nested RDP sessions like me, it's fast and responsive. I've had some of my photographer clients who know the square root of negative fnord about computers poke around the interface after having received only the elevator pitch on what iSCSI is, and they were creating and using LUNs in minutes. 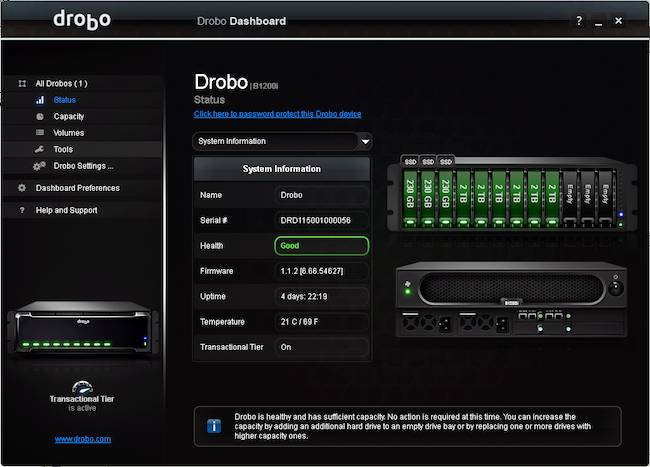 Next page: Time to open her up: What's the performance like?
Page:
Corrections Send us news
63 Comments

Mozilla hopes to challenge Raspbian as RPi OS of choice

Project to port Firefox OS to Raspberry Pi is under way

It's all about contextual relationships

RoboBiz A Studio for the future

Comment Comrades: We present your official alternative to Android

This is an entirely sensible view of the near future. Cough