No prize for guessing the leader, but the rest may surprise you

Archaeologic How popular - relatively speaking - was your early 1980s home computer? Thanks to some old chart data, we can tell you.

Back in the day - 1983, to be precise - VNU Business Publications’ launched Personal Computer News, a glossy magazine pitched against the weekly incumbent, Sunshine’s newsprint Popular Computing Weekly. A little way into its run, PCN began running a chart of the top 20 microcomputers costing less than £1000, compiled by research company MRIB and covering two weeks’ sales data at a time.

Fortunately, we have here a set of the issues - courtesy of a senior Vulture who was one of the magazine's sub-editors - from the launch of the chart in July 1983 right through to early January 1984 when the 10-20 December 1983 figures were published, so we can contrast summer sales with the crucial pre-Christmas sales period - a time, you may recall, the UK’s home computer companies were hoping would be a bonanza.

I’ve compiled the data and crunched the numbers, which paint a fascinating picture of the home micro market of the time. The chart is a little tricky to read, I'll admit, but look closely and carefully, and you’ll get the picture. 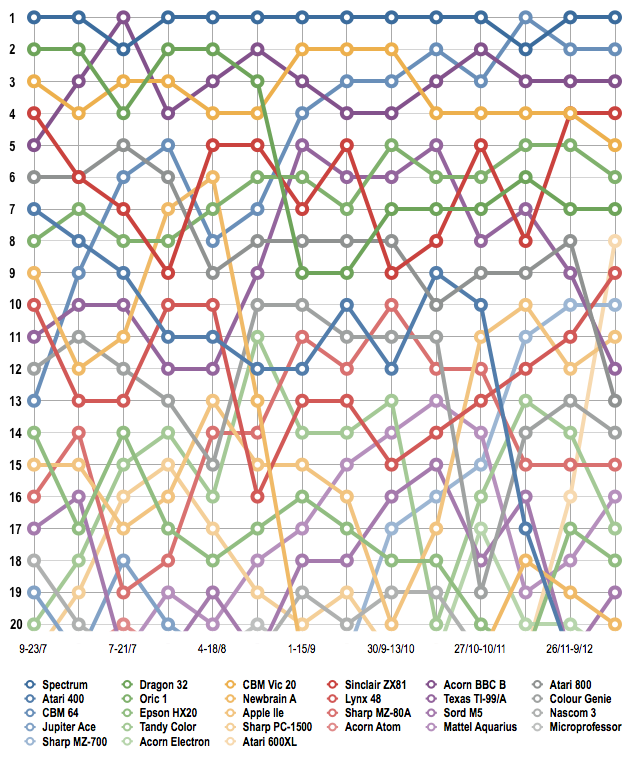 Click for a larger, easier to read version
(With inevitable apologies to colour-blind readers)

You won’t be surprised to learn that Sinclair’s ZX Spectrum was the best-selling computer, knocked off the number-one spot on only two occasions: by the Acorn BBC Model B and the Commodore 64, respectively. The Beeb has an average chart position of three, but the Commodore rocketed up the chart during the period to become the second best-selling machine.

Conversely, the Dragon 32, never considered one of the top sellers in enthusiasts’ minds, spent some time in second place before dropping to around fourteen place at the end of the summer. During the latter part of the year, it was being left behind by older micros the Commodore Vic-20 and the Sinclair ZX81. Thanks to their low prices, both remained toward the top of the chart - the Vic in third place, on average, the ZX81 in sixth.

Other oldies include Tandy’s TRS-80 Color Computer, which sported the same spec as the Dragon but a much higher price. Its sales peaked in the summer than dropped off, before rising again just before Christmas. But with an across-the-chart average of fifteenth place, it was never a major seller, though not a bad one either.

The newest machine in the list, Acorn’s Electron, was launched in the summer specifically to target back-to-school and Christmas buyers with a low-cost BBC Micro-compatible. Toward the end of the year, it entered the chart at number 17... and dropped to the bottom almost immediately.

Another new machine, Mattel’s Aquarius, rose up the chart from nothing but dropped down as Christmas neared. 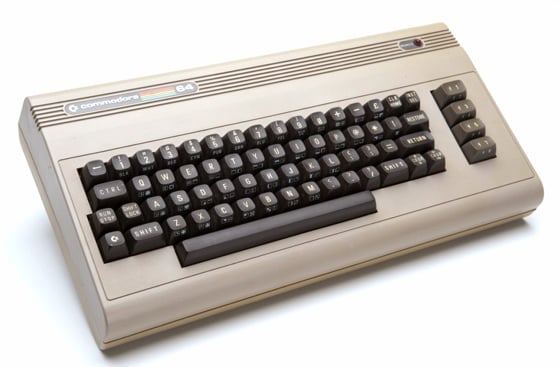 Contrast that with the Atari 600XL, launched here in the autumn yet which shot to thirteenth place by the end of the year. The machine it replace, the Atari 400, was on a slow decline from seventh place during the latter part of 1983, but its demise was as rapid as the rise of its successor. Its bigger sibling, the Atari 800, was also hit by the arrival of the 600XL, but not to the same extent. It put in some respectable chart positions, which gently fell during the year.

Other 1983 newbies included the Oric-1 and Camputers’ Lynx. The latter did better than you might expect given how much its has been forgotten in subsequent years, but it never really challenged the Dragon, let alone the likes of the Sinclair, BBC and Commodore machines. Not so the Oric, which rose from eighth place to sixth, pushing past the Welsh micro but, again, never seriously threatening the low-cost machines it was pitched against.

Apple’s IIe hovered through the bottom third of the chart, but picked up a bit in the pre-Christmas period. Other business/pro machines feature in the chart, especially models from Sharp, such as its MZ-80A and its follow-up, the MZ-700, which lacked the other’s built-in display. The MZ-80A was respectable seller, getting into the top half of the chart at one point, though it tailed off a bit toward the end, hindered by the MZ-700’s meteoric rise.

Sharp’s third machine in the chart, the PC-1500, was, like Epson’s HX-20, a portable - both saw their chart positions slide through the year. The portable (kind of) Grundy Newbrain, launched the previous year, started out ahead of its rivals but dropped out of the chart in early September, though it had a small revival just before Christmas. Likewise, the collapse of Jupiter Cantab knocked the Forth-running Jupiter Ace out of the chart in the autumn of 1983. It never rose about eighteenth place. Ditto the Nascom 3. The Sord M5 - released in the UK as Computer Games Ltd’s CGL M5, fared better, but it too dropped out of the chart at times.

Of course, that didn’t mean its sales vanished - just that it was no longer in the top 20. And it’s also important not to forget that the data provides only relative chart positions, not absolute sales. The difference between one chart position and another could mean a few extra sales or many, many more. ®