Meteorite is missing link to Red Planet's wet past

Pic A Martian meteorite nicknamed Black Beauty contains more water than any other rock found from the Red Planet. 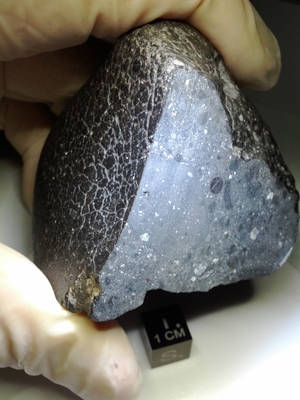 The space stone, discovered in Morocco, is believed to come from the Martian crust 2.1 billion years ago, during the planet’s Amazonian era. Beauty, also designated NWA (Northwest Africa) 7034, weighs about 320g and has 10 times more water than other Martian rocks.

"The contents of this meteorite may challenge many long held notions about Martian geology," said John Grunsfeld, associate administrator for NASA's Science Mission Directorate. "These findings also present an important reference frame for the Curiosity rover as it searches for reduced organics in the minerals exposed in the bedrock of Gale Crater."

Black Beauty is made up of cemented fragments of basalt, mostly feldspar and pyroxene, most likely from volcanic activity.

"This Martian meteorite has everything in its composition that you'd want in order to further our understanding of the Red Planet," said Carl Agee, leader of the analysis team and director and curator at the University of New Mexico's Institute of Meteoritics.

"This unique meteorite tells us what volcanism was like on Mars two billion years ago. It also gives us a glimpse of ancient surface and environmental conditions on Mars that no other meteorite has ever offered."

The boffin team reckon that NWA 7034’s large water content comes from the interaction of water-logged rocks in Mars’ crust. The rock also has a different mixture of oxygen isotopes than that of most Martian meteorites, which could have come from interaction with the planet’s atmosphere.

The full research on the black stone was published in Science. ®