A savvy sneak slipped into a Microsoft campus, stole five iPads and left all the Microsoft products untouched, according to cops.

More than $3,000 in Apple kit was nicked from the research and development complex in Mountain View, California, over Christmas. There was no sign of a forced entry at Building 5 on La Avenida Street, whose staff use electronic cards to enter the offices, said Sgt Sean Thompson.

The five fondleslabs - two iPad 2s, two third-generation iPads and an "iPad 4" - were taken from three offices. The latter is understood to be the latest generation of Apple's tablet rather than a secret new device.

Microsoft reported the crime to the police on 2 January but believes the electronics were stolen between 19 and 26 December. Police are waiting for CCTV footage from the campus.

Word of the theft spread after a photograph of a report in the Palo Alto Daily Post - strap line: "news you can't get on the internet" - appeared on websites Imgur and Reddit. The article was not available online, but the story was confirmed to The Reg by the Mountain View Police Department this afternoon. Many netizens had assumed the tale was yet another web hoax. 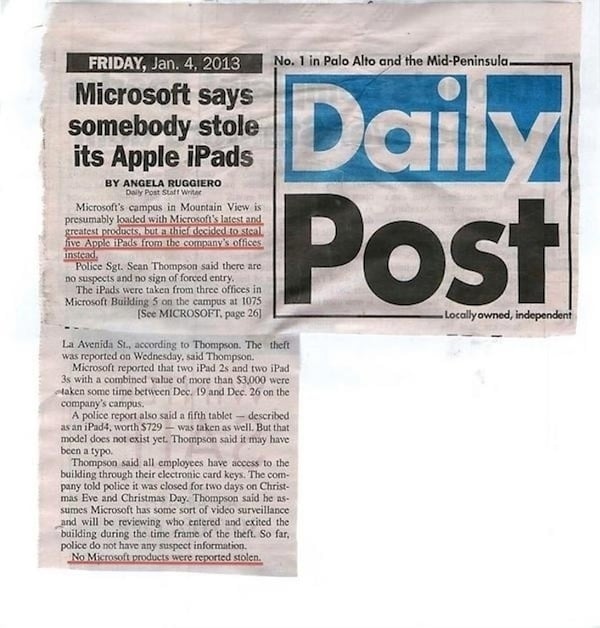 Meanwhile, Daily Post writer Angela Ruggiero, whose byline appeared on the story, has also confirmed that the above clipping is not a mock-up.

The iPads may have been the obvious thing to steal in Building 5: that's the place where Microsoft, whose headquarters are in Redmond, develops software for Apple hardware. It's possible the thief has got hold of some unreleased Microsoft apps with his or her Apple devices. The office also houses Microsoft Exchange hosting servers, a less tempting target for a light-fingered thief.

Microsoft did not respond to a request for comment. ®