CES 2013 Exactly why someone would want to play Monopoly on an all-in-one PC lying flat on the kitchen table, Intel didn't say, but a tableau vivant of a nuclear family doing just that was the centerpiece of a "Bringing Back Family Night" demo the company presented during a press event at CES 2013 on Monday.

The IdeaCentre Horizon, Skaugen explained, is one of a new breed of "battery backed" all-in-ones that can be detached from its power source and laid flat on a table, where its ten-finger touchscreen can be accessed from all four axes.

"Here we have a typical family," Skaugen explained. "Whereas instead of everyone kind of huddled around their phone, we've actually brought the mobile computer over to the coffee table, and they're playing Electronic Arts Monopoly." According to Skaugen, playing on the computer what was formerly an archaic, analog board game is "really bringing the family together."

Color us unconvinced. Where are the marvelously tactile pewter dog, top hat, race car, thimble, iron, and so on? Where is the joyfully multicolored paper "Monopoly Money", with its richly hued orange $500 bills – £500 in the UK, one assumes. Where is the challenge of keeping all those tiny green houses perfectly lined up in each square? 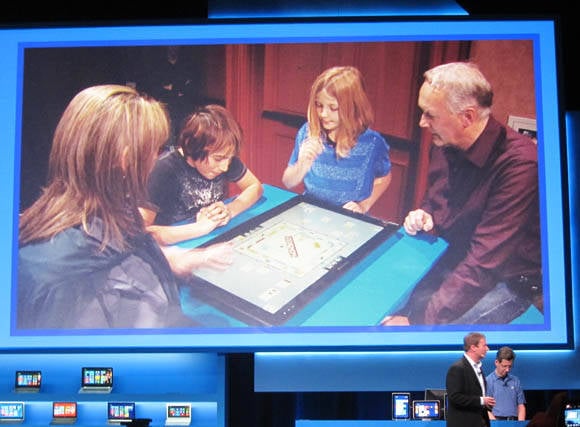 How can our kids learn to cheat when the game is controlled by an ever-watchful Intel processor?

More importantly, where is the opportunity to surreptiously bag a beige $100 bill from your brother's stash when he is called away from the game to answer the call of nature after one too many Yoo-Hoos?

And finally, the fatal flaw. According to Lenovo, the IdeaCentre Horizon's battery lasts a mere two hours. Have you every played a full game of Monopoly that ended so expeditiously? No.

In an increasingly digital world, some things are better left analog, the advancements of Table PCs notwithstanding. Certainly, such devices might have their place in business, commerce, or even classoom education, but there's a lot to be said for the pleasures to be derived from shared family experiences not mediated by Yet Another Touchscreen.

Where are the Luddites now that we really need them? ®

I can hear the question forming in your mind, so I'll answer: your humble Reg reporter is 62 years old.