Finally catch up with US drug dealers of the 1990s

The British regular forces are to receive their first new pistol since World War II, as the long-serving Browning 9mm sidearm is replaced by a new weapon from the well-known Austrian firm Glock. 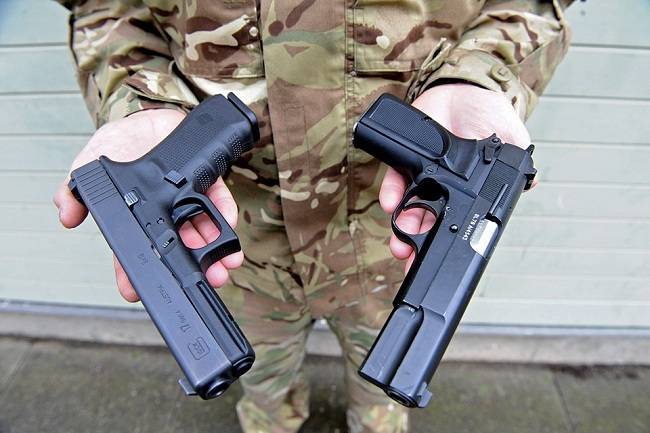 The new pistol is the Glock 17 Gen4, which fires the same NATO standard 9x19mm cartridge as its illustrious predecessor. However the Glock holds 17 rounds as opposed to the Browning's 13 - and even more crucially the new weapon can be carried with a round in the chamber ready to shoot at a moment's notice due to its modern safety mechanisms, a practice which was normally forbidden with the Browning*.

Though the process of choosing the new pistol began two years ago - before the current trend of "green on blue" attacks had intensified, in which Afghan soldiers or cops turn their weapons on NATO troops - it's hoped that the quick-draw capability offered by the Glock will let British troops in Afghanistan defend themselves against supposed allies at close quarters more effectively, without compromising weapons safety.

Some 25,000 Glocks are to be purchased in an £8.5m deal, such that in general they will be carried only by a minority of Forces personnel, as is normal for pistols. However the MoD has stated that all troops in Afghanistan will be issued the new handguns if their commanding officers consider that they need them.

The now superseded weapon was designed way back in the 1920s by the legendary weapons engineer John Browning and first manufactured by Fabrique Nationale of Belgium in 1935. It was known commercially as the "Browning Hi-Power". It was first issued to British forces during World War II, and gradually replaced all other pistols then in service to become the UK's standard military sidearm. In its day it was a great weapon, and pistol design has evolved only incrementally since then, but today's handguns are measurably superior and it was surely time for a change - the more so as the existing Brownings must have been pretty worn out by now.

The wars in Iraq and Afghanistan have enabled the British forces to slowly and belatedly sort out their dire personal-weapons situation of the 1990s. The crappy Royal Ordnance/BAE Systems SA80 (L85A1) rifle was rebuilt in German factories so that it is now a good weapon, and proper belt-fed light machine guns and 40mm grenade launchers were procured. Other popular pieces of kit such as the L115A1 sniper rifle (from the famous Portsmouth firm Accuracy International, perhaps better known under its commercial name Arctic Warfare Super Magnum), the new combat shotgun and the new 7.62mm Sharpshooter rifle have also appeared in response to battlefield needs. Now with the new Glocks, at last, pretty much all the personal weapons carried by British troops today can be said to be first-class.

Sadly one can't say the same of most of the Forces' larger and more expensive equipment, but one must be grateful for small mercies - and perhaps remember that the wars we actually fight tend to be fought much more with personal weapons than with submarines, stealth fighters etc. ®

*The Glock has triple safety mechanisms which mean that its firing pin will not move forward unless the trigger is back, the trigger cannot be moved back unless a finger is pressing on its front and the weapon will not fire if dropped. The weapon's hammer is internal, and as such cannot snag on clothing or be bumped inadvertently into a different position.

By contrast the Browning had only a manual safety catch for its hammer only, and the external hammer could fairly easily be inadvertently brushed or knocked back to full cock. This meant that it was in general forbidden to carry it with a round in the chamber, as the risk of an accidental discharge would be unacceptably high (although certain very highly trained special operations units did carry the Browning with a round up the spout as routine, until that community moved to Sig Sauer pistols in the early 1990s). Unfortunately this meant that in general it would take quite a long time to get off a shot, as the user would have to work the slide to chamber a round after drawing the weapon.

The Browning did have a design feature in which its hammer could be put at half-cock (aka "half bent"). Provided the mechanism was working correctly, even if the trigger was pulled from this position the weapon would not fire: and if the hammer was joggled it could not travel forward beyond half-cock, preventing a chambered round being fired. If a round was chambered, the user would need only to thumb the hammer all the way back to full cock in order to shoot.

However there were several ways this could go wrong, and the standard British manual for Browning use specifically forbade the use of the "half bent" position as a safety device.