Sales of personal computers – fat workstations, clunky desktops and laptops not running Android or iOS – took a bigger dive as 2012 wound down than the box counters at IDC had expected.

People are not necessarily shifting from PCs to smartphones and tablets, but these new devices continue to lengthen the time between PC upgrades. And Windows 8 is something a lot of people still don't want to move to and this is not helping the situation, either.

IDC has just finished running its models of PC shipments in the fourth quarter and for the full year on a worldwide basis, and drilled down into the US market, which you can see in full here.

No one was anticipating that the PC market would grow in the final quarter of the year, but the drop in PC sales were steeper than IDC originally thought when it was prognosticating a few months ago. The box counter was expecting a 4.4 per cent contraction, but what we got was a 6.4 per cent fall, from 95.9 million units shipped in Q4 2011 to 89.8 million units in Q4 2012.

Bringing down the class average were Dell and Acer Group, while Lenovo and Asus did their best to raise the average. Hewlett-Packard was down a smidgen in the quarter and perhaps did a bit better competing against Lenovo, which has set its sights on the PC and printer maker.

Hewlett-Packard managed to hold onto its top shipper position in Q4, pushing just a little over 15 million machines and declining six-tenths of a point. Lenovo, which has been coming on strong in recent years thanks in part to its acquisition of IBM's PC business and also thanks to its booming and indigenous Chinese market, grew shipments by 8.2 per cent to 14.1 million machines. 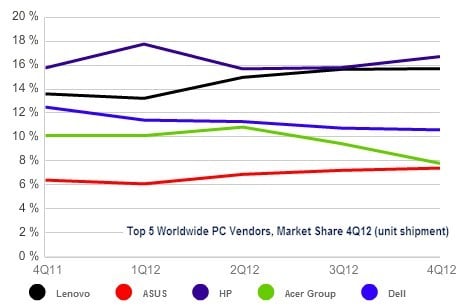 "Although the third quarter was focused on the clearing of Windows 7 inventory, preliminary research indicates the clearance did not significantly boost the uptake of Windows 8 systems in Q4," explained Jay Chou, senior research analyst with IDC's PC Tracker service, in a statement.

"Lost in the shuffle to promote a touch-centric PC, vendors have not forcefully stressed other features that promote a more secure, reliable and efficient user experience. As Windows 8 matures, and other corresponding variables such as ultrabook pricing continue to drop, hopefully the PC market can see a reset in both messaging and demand in 2013."

A lot of the blame for the decline in PC sales both in the fourth quarter and for the full year can be attributed to changing buying patterns in the United States among both consumers and companies.

The dividing line there is also getting hazy, thanks to "bring your own device" attitudes. No one talks about this, but BYOD doesn't just mean you can bring your tablet to work, but that the company may not buy your PC at all.

So a PC sale on the corporate desktop that might have materialized in fact does not. Similarly, BYOD in other cases means the company buys the laptop or tablet and the users take it home and that's a machine they don't have to buy themselves for home use - again another potential sale evaporates.

The aggregate number of devices we have access to is increasing, fostering the deployment of virtual desktop infrastructure at the office. Maybe – just maybe – this will trend will spread to the home someday if consumers decide to keep their PCs and their applications in house and access them remotely rather than just moving to cloudy applications hosted elsewhere and end up using their laptops and desktops as thin clients.

It is hard to say how this will all play out because of the many different options for personal computing out there across devices – do you get an ultrabook or a tablet? – and clouds. It is no wonder that predicting PC sales has gotten more difficult.

Perhaps the US market is wrestling with these very issues right now and that is why the declines are so steep there for PC sales. IDC reckons that PC shipments in the US declined by 4.5 per cent in the fourth quarter to 17.7 million machines. The company did not provide shipment figures for other regions, but did said that EMEA PC shipments were in line with expectations and down in the middle single digits, that Japan was slightly positive but several points below forecasts, and Asia was slightly below the models because the channel was still clearing out Windows 7 inventory.

HP managed to hang onto its number one position for the year, despite a 6.7 per cent decline to 58.1 million units. Lenovo came on strong with 19.2 per cent growth to a total of 52.5 million desktops and laptops, and number three PC shipper Dell stomached a 12.6 per cent decline to 38.7 million machines.

Acer was down 9.7 per cent for the year to 33.5 million boxes, and Asus rounded out the top five with 17 per cent growth to 24.1 million machines. Other vendors pushed 145.5 million machines last year, falling 6.5 per cent and showing that Lenovo and ASUS are not just taking share from HP, Dell and Acer. ®