Largest ever spiral galaxy spotted - may give birth to dwarf baby

The universe's largest known spiral galaxy and its nearest neighbouring galaxy have been interacting for some time, say astrophysicists. And all of this canoodling may result in the birth of a new tidal dwarf galaxy system 212 million light years from Earth. 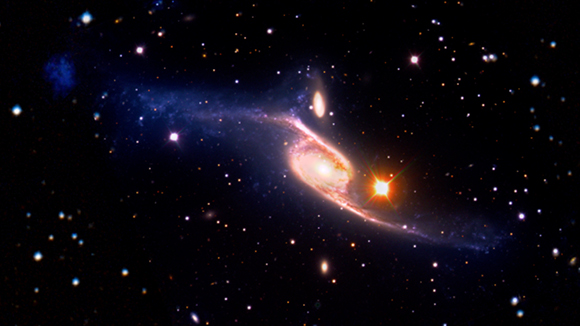 "Without GALEX's ability to detect the ultraviolet light of the youngest, hottest stars, we would never have recognised the full extent of this intriguing system," Rafael Eufrasio, a research assistant at NASA's Goddard Space Flight Center said at the American Astronomical Society meeting yesterday.

The boffins found the massive galaxy by accident: "I was not looking for the largest spiral – it just came as a gift," Eufrasio told BBC News."

Measured tip-to-tip across its spiral arms, the galaxy spans more than 522,000 light years, making the star system five times the size of the Milky Way.

Large galaxies like NGC6827 and the Milky Way grow by merging and acquiring new stars from smaller systems, in the former's case, from a neighbouring small disc galaxy named IC4970. But in this case, instead of absorbing all the stars from IC4970, the gravitational interaction of the systems is spawning stars that may form a brand new galaxy.

"The northeastern arm of NGC 6872 is the most disturbed and is rippling with star formation, but at its far end, visible only in the ultraviolet, is an object that appears to be a tidal dwarf galaxy similar to those seen in other interacting systems," said team member Duilia de Mello, a professor of astronomy at Catholic University.

The dwarf candidate is awash with bright UV light, indicating that it has many young stars, less than 200 million years old.

The boffin team have now studied the galaxy using data from the ESO's Very Large Telescope, the Two Micron All Sky Survey and NASA's Spitzer Space Telescope, and found the galaxy is youngest at the tip of its northwestern and southwestern arms and ages towards its centre.

"Understanding the structure and dynamics of nearby interacting systems like this one brings us a step closer to placing these events into their proper cosmological context, paving the way to decoding what we find in younger, more distant systems," said Goddard astrophysicist Eli Dwek. ®