Keep bags of rice handy – and dry – ahead of superstorms

It is not clear how many servers Hurricane Sandy wiped out, but at least one Dell PowerEdge box in the Maspeth neighborhood of Queens not only survived the flood sufficiently to allow for the company to boot up the box to get its data off, it managed to do that after being soaked in acid-laced salt water.

The server in question that survived the storm surge in the wake of Sandy was owned by Davis & Warshow, a bathroom and kitchen fixture supplier located in the borough of Queens in New York City. The company is located off Maspeth Creek, which is a tributary off the East River and which overflowed its banks during the storm surge.

The company had just received a shiny new 12th generation PowerEdge R720 powered by Intel's latest Xeon E5 processors the week before the storm, and system administrator Wayne Miller was preparing to migrate data off an earlier generation PowerEdge R710 to give its four virtual servers some more compute and memory to frolic within. The idea, as explained in this post on Dell's blog, was to use the new PowerEdge R720 as the primary machine and keep the R710 box as a backup box.

That was before the salt-water and battery-acid cocktail (definitely shaken and stirred) came into Davis & Warshow's data center, which made a big mess. Once power was restored to that part of Queens, the company took its servers out onto a forklift palette and washed off the sludge and slime with a garden hose.

Dell tech support explained that to help dry the machine out, it should be packed with dry rice. The techies complied and went about restoring the network switches that link the company's headquarter location with ten other company stores in Manhattan, Brooklyn, and Long Island. 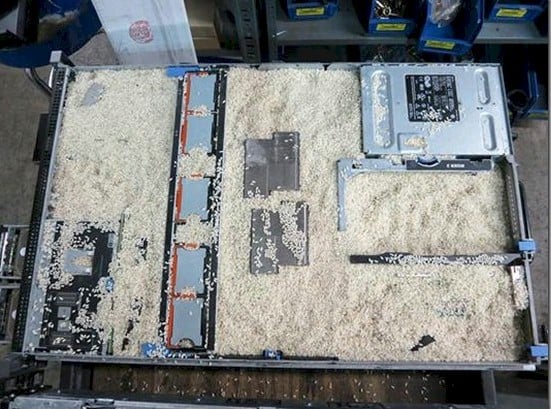 Using rice to dry out a flooded server

A week later, the power was back and the network was restored. Miller vacuumed out the PowerEdge R710, and when it fired up rice spit out of its fans. The machine worked long enough to get the company's data and four virtual machines off the box. No word on whether this box will be its backup machine going forward, but presumably not.

Remember – keep a few bags of rice around if your data center is anywhere near sea level. And maybe some mouse traps, too. ®