Fedora's Linux distro no slick alternative to Ubuntu - yet

Review Fedora 18, Spherical Cow, is here. Finally. The Fedora Project has never been one for precision roadmaps, but previously it has managed to stay pretty close to its official May and October release schedule. Spherical Cow, however, proved to be a difficult beast - it is nearly three months late.

The numerous delays can be chalked up to the new version of the Anaconda installer that ships with Fedora 18. The delays due to the revamped installer are understandable. Installers are one place you really don't want bugs.

It's not hard to see where Fedora is aiming with Anaconda, essentially a single screen with buttons to customise your installation if you like, but which do not require the Linux newbie to dive too deep. It also bears more than a passing resemblance to the proposed GNOME OS, which gives it a nice, fully integrated feeling similar to what Ubuntu offers in its installer.

It all looks good on paper, but sadly Anaconda just isn't there yet and installing Fedora is still a bit more trouble - or at least it requires you to answer a few more questions - than say Mint or Ubuntu. Anaconda is also on the slow side, which only annoys you once, but doesn't bode well given that speed was purportedly one of the things Fedora has been working on.

The net result of the new installer is that Fedora 18 is easier to install than previous releases, but still not as polished or simple as what Ubuntu and Mint offer.

Fedora 18 ships with GNOME 3.6 and the usual slew of GNOME application updates but given Fedora is several months behind schedule, GNOME 3.6 is largely old news at this point. In fact, the next update, GNOME 3.8, is due in just a couple of months. 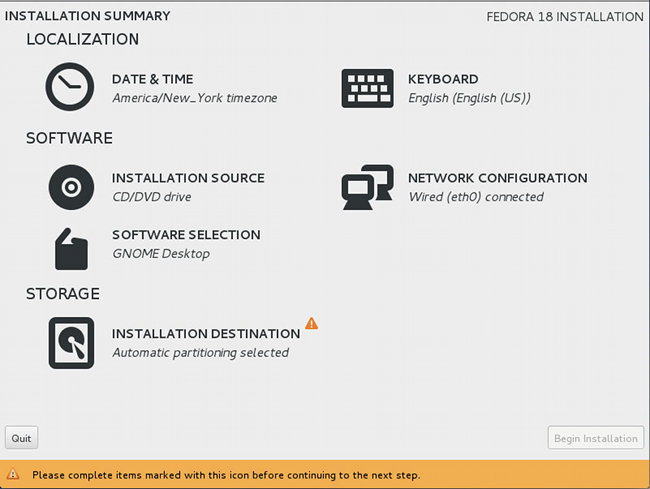 The Anaconda installer: The look is simple enough, but the actual installation process is another matter.

But for those who haven't updated to the new version of GNOME there are a couple of noteworthy changes, including a revamped notification system that uses larger icons and now offers a Close button so that you can quickly dismissing notices.

The most fundamental UI change is that now when you click the "Activities" menu the GNOME Shell defaults to showing your open windows (in the manner of the Expose feature popularised by Apple). To see your applications - formerly what happened when you clicked "Activities" - you need to click the new grid icon at the bottom of the sidebar. Naturally the position of that icon isn't customisable without installing a third-party "tweak" tool of some kind.

The GNOME 3 team has also given the Nautilus file browser some attention in this release. Whether or not that's a good thing depends on how closely your vision of the desktop aligns with that of the GNOME 3 developers.

There are a couple of nice new features, like the streamlined appearance and the "recent" sidebar item that lists things you've recently opened. But, as is common with GNOME 3, for every two steps forward there are three steps back.

In GNOME 3.6 that means removing the dual pane view from Nautilus, eliminating the search-as-you-type and killing off the search box entirely in favour of an icon that you'll now need to click every time you want to search. Which you shouldn't be doing, because you should be searching in the Shell, you see.

Next page: GNOME 3 is the IE of desktop environments, MATE
Page: