Read a press release from Apple in the 1990s and it'll end with something along the lines of:

All of which is true up to a point, but the statement does overlook the product that Steve Jobs declared “will make a dent in the universe”. At the time he was referring to the Apple Lisa, the company’s first desktop computer to feature a mouse and an icon driven interface. As far as personal computing goes, it was a world first too. Tomorrow, the Lisa hits 30.

Jobs’ excited remarks about the computer were made following a visit to the Xerox PARC facility in 1979. He was convinced that the graphical user interface he saw at Xerox, along with the mouse, had the potential to shape the future of computing. He was right, but his handling of the Lisa project led to his departure from the team in September 1980.

With the PARC influences in place, the Lisa project continued without Jobs. The universe would have to wait as he dealt with the dent in his ego. To pursue his vision, Jobs latched on to Jef Raskin’s computers-by-the-millions Macintosh concept. More on that around this time next year when the Mac itself turns 30. 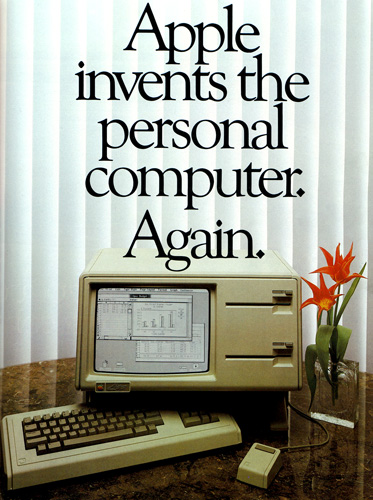 Proposed in 1978 and in development since 1979, the Apple Lisa went on sale on 19 January 1983 for $9,995. To say dealers were nervous about the price is an understatement. The Apple II computer had made the company a fortune but was six years old and the pricey Apple III had problems that, despite being fixed, damaged confidence in the product. IBM had also made in-roads with its own PC hardware platform running DOS and CP/M-86.

Another unsettling issue was that the low-cost, easy-to-use $2,000 Macintosh was waiting in the wings. The two products were to be pitched at different markets yet beyond its GUI, Lisa’s hardware sophistication was an indulgence many would appreciate but few could afford. Back then, even the memory in the Lisa would have cost a few thousand dollars – a time when most would have been grateful for 128KB.

Based around a Motorola MC68000 processor, the Lisa offered 32-bit computing and supported up to 2MB of RAM. The 7.9MHz CPU was clocked at 5MHz and original units featured 1MB RAM with two Apple FileWare 5.25in doubled sided floppy drives. In-house, they were dubbed Twiggy drives after the thin British fashion model, and each diskette could store about 871KB. Despite Apple’s best efforts to minimise wear on the drive head, the Twiggy’s reliability left a lot to be desired. It was also a non-standard media – it had additional cut-outs on the sleeve – and was widely criticised. It even started a lawsuit, which was finally settled in 1992 and cost Apple $16m.

A year later these FileWare drives would be replaced by a single Sony 3.5in 400KB floppy drive, which were also used in the Lisa 2. Available as a free upgrade for all original Lisa owners, the process also involved updating the boot ROM and I/O ROM and changing the front enclosure to a single slot. The whole set-up took about 30 minutes.

Typically, the Lisa was sold with a 5MB ProFile hard drive although a 10MB disk was available later. This storage was designed for the Apple III in 1981 and plugged into a 25-pin parallel port at the back of the Lisa. Models supplied with hard disks became known as the Lisa 2/5 and 2/10 depending on the capacity. The 2/10 actually featured an internal 10MB Widget drive and was the last of the Lisa line – that particular model was renamed the Mac XL in January 1985. Original Lisa owners wanting to upgrade to an internal drive would also need a parallel port card along with a replacement motherboard and about $2,500 in spare change.

There were also two serial ports supporting full-duplex asynchronous-mode RS-232C or RS-422 protocols at rates from 300bps to 57.6kbps. Again, the Lisa used 25-pin interfacing – and with only minor differences in speed – these serial ports functioned almost identically to the DE-9 plugs found on the Mac. AppleBus, later rebranded as AppleTalk, was also available through these ports. As for the keyboard – featuring function keys and a numeric pad – it used a 0.25in three-pole jack at the front and the mouse hooked up at the back with a 9-pin D-type connector.

Internally, the Lisa had three expansions slots but apart from the dual parallel port card, for use with ProFile drives, the range of options was fairly limited. However, a triple port parallel card existed and SCSI interfacing appeared too. If you had $9,000 to spare, the Priam DataTower 86MB HDD and 60MB tape drive combo could be added that relied on its own interface card.

A Tecmar four-port serial card existed for Unix networking as users could also run a port of Xenix based on AT&T’s Unix System III. There wasn’t much else out there and despite hopes for a colour monitor card, it never materialised.

There are two kinds of people... apparently Kevin Costner is one of them

Yup, the Lisa’s 12in 720 x 364 dots screen was monochrome and it used rectangular dots, aligned to be tall. The idea was to ensure its resolution delivered 80 columns of text. This proved to be an issue when running Mac software as the Mac’s 9in 512 x 342 screen used square dots, causing image distortion. All in all, the Lisa 48lbs of hardware amounted to what we’d call a workstation today and bordered on minicomputer status back then. Users of microcomputers were more likely to find an Intel 8088 or 8080 chip running the show. The Lisa could process twice as much data as the former and four times that of the latter. You could also anticipate the Lisa working up to 60 per cent faster than a PC with an 8088 CPU, faster still on 8080 models.