Another one of Atkinson’s major contributions was the Desktop Manager. This was a collaborative effort by stealth with Dan Smith and Frank Ludolph. Smith had been working on Lisa Filer which handled file management and launched other applications. Among Filer’s features was a dialogue window that had so many prompts for tasks such as Open, Copy and Discard that it became known as the 20 Questions Interface. Unhappy with its design, Smith tested it out on his wife, who couldn’t follow its logic, which led him to discuss his misgivings with Atkinson and Rudolph. 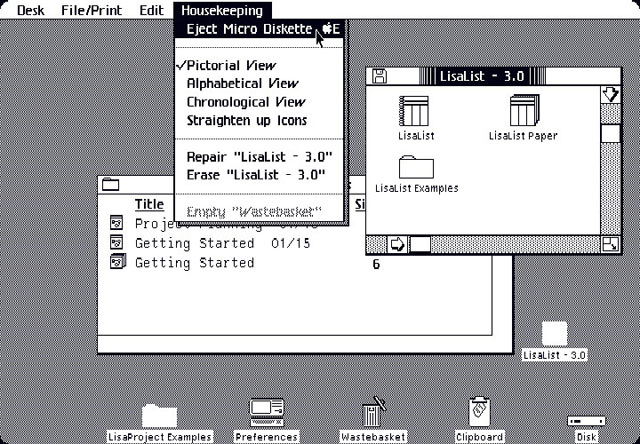 Recalling the Dataland prototype he’d seen at MIT, Atkinson shifted the emphasis to an icon-based approach enabling files to be seen and moved around with the mouse. The trash can icon made its debut too and the ease of use of the design began to shine through. Everyday office stationery and objects appeared graphically on this virtual desktop which could be tidied up in a stroke with icons automatically aligning. The trash would hold discarded files and you’d have to empty it to delete or simply drag out anything that was to be kept.

It was the spring of 1982 and Lisa was slated to ship for the autumn. The idea of a rethink this late in the day wasn’t likely to go down too well and so they worked on getting a mock-up together before showing it to Wayne Rosing, Lisa’s engineering manager. Rosing could see these ideas had promise, so minded of the schedule, he turned a blind eye to them working on the project for a couple of weeks to get a stable version together. If that didn’t happen, then it was back to Filer.

Another condition was not to show this early work to Steve Jobs. If they couldn’t deliver, Jobs would no doubt disrupt the schedule pursuing it. They were also sneakily trading ideas with Bruce Horn on the Mac team and his Finder concept. Near the end of the two week period, Jobs got wind of the work and the game was up. Fortunately, the Desktop Manager was in good shape by then, Jobs loved it and Rosing was happy to adopt this new modus operandi for Lisa. When presenting the new direction to the rest of the team, the covert ops Desktop Manager developers appeared in newly printed 'Rosing's Rascals' T-shirts.

The hiring at Apple continued and, depending on where you look, estimates range from 90 to 200 people on board for Lisa. Tesler’s Applications Software Group had 20 personnel working on Window manager, QuickDraw, the Desktop Manager (previously Filer) and a suite of Lisa apps. With some input from Apple’s marketing bods, these would become LisaCalc, LisaDraw, LisaGraph, LisaList, and LisaProject, LisaTerminalReceive and LisaWrite. 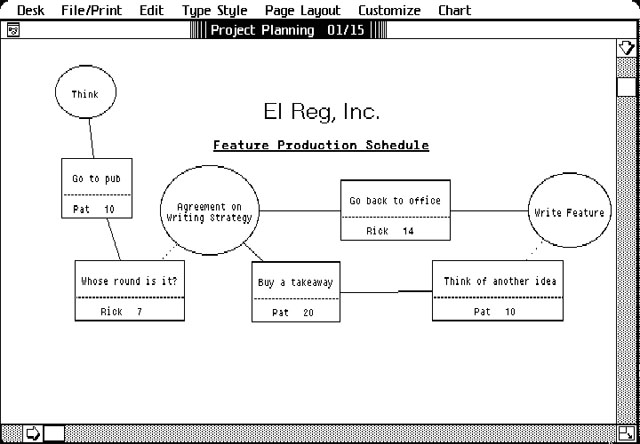 These seven applications, later called Lisa 7/7 were essential in making the Lisa attractive to business. A key feature of the software was its capacity to share information between applications with its copy and paste commands – a level of intuitive interactivity that aided ease of use enormously that also fitted with John Couch’s datagramming vision. They also featured stationery pads for creating new files; the stationery would also launch the correct application when double-clicked. 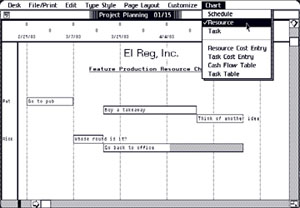 One application, LisaProject, actually came about to meet the needs of the team for tracking schedules and would later be marketed for a wider audience with customers including NASA. It was devised by Debbie Willrett, wife of one of the Lisa team. The first of its kind, LisaProject enabled PERT (Program Evaluation and Review Technique) charts to be shown on-screen showing all the interdependent relationships and the critical path method (CPM) structure. The easy updating of PERT chart activity and the schedule output as a Gantt chart was a significant enticement to business. Indeed, it was the dependence on LisaProject that worried NASA most after Lisa's eventual demise.

Back in the office though, Lisa’s simplified printing dialogue functions were another breakthrough that, together with the ImageWriter dot matrix printer, enabled an uncomplicated workflow for printing jobs. 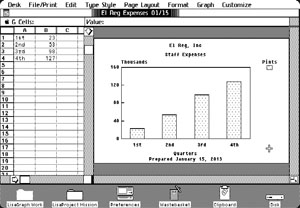 LisaGraph brought statistics to life – click for a larger image

Easy-to-use WYSIWYG applications aside, the Lisa had innovations as a workstation environment too, with advanced features including protected memory, virtual memory and cooperative multitasking. Beyond the GUI that was named the Lisa Office System there was the Workshop program development mode which was almost entirely text-based. One issue with having these two machine environments was that ideally you’d need two Lisas to develop software on – one for coding in Pascal, the other for testing on the GUI, although you could always dual boot from one into the other. Also, the Mac owed an enormous debt to Lisa, given its hardware muscle; it was the primary tool for writing apps for the fledgling platform.

With Lisa’s primary software challenges resolved, work began in earnest on debugging and performance enhancements, a rather less glamorous endeavour than reinventing the wheel. Adding to the strain was the poor reception of the Apple III. Launched in May 1980, it was received as an incremental upgrade, rather than an innovation. Worse still, the machine was so buggy the first 14,000 units were recalled. Despite fixes, Apple’s seemingly unblemished reputation had taken a big hit and the Lisa team felt an increased responsibility to deliver a reliable product – one that could put a dent in the universe. 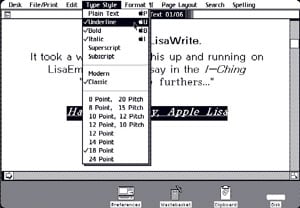 Another long shadow hanging over the endeavour was the schedule. The Apple Lisa was supposed to ship in March 1981. When quizzed on this timescale the previous summer, Rosing diplomatically remarked that it was “optimistic”. Indeed, following the January 1983 launch, the Lisa didn’t make it into the shops until May. The delays also undermined Apple’s standing and speculation was rife that the company couldn’t deliver. As the project’s existence was widely known, industry pundits were already armed with an opinion without even having seen one.

Although the proposal for Lisa appeared in 1978, Tesler’s view is that it only took three years to get it into production given the direction change in March 1980 – a few months after the PARC visit – that redefined Lisa. Part of Apple’s marketing strategy was that it had taken “200 person-years to develop programs you can learn in 20 minutes” and few could argue that what they saw on the screen was intuitive and instantly recognisable. As the Apple sales blurb declared, “Now you know where the world’s going, consider the advantages of getting there first”.