If you read through some of the interviews of the Lisa team post-Macintosh, you soon get a sense of deflation. The Mac eclipsed their efforts and the advanced features of the Lisa went unnoticed beyond computing professionals and Mac software programmers. While a sense of pride in their achievements is undimmed, the Lisa’s shortcomings in terms of price and performance, and its early retirement, must surely have stung quite a bit. They never expected the dent in the universe to be the landfill site where the unsold Lisa inventory was dumped to facilitate a tax depreciation write-off.

On reflection, Rosing remarked that it was the “largest project ever undertaken for a microprocessor”. Fewer than 100,000 Lisas were sold but according to Trip Hawkins, Apple still raked in $100m. As for that microprocessor choice, Alan Kay had his own view of this modern marvel: "The Lisa failed because it was very underpowered, and so, while it did beautiful things, it did them very slowly."

Direct manipulation of the on-screen interface was certainly the future, but in giving the world an office environment on the desktop, Apple had underestimated users' expectations once they became familiar with the machine. Using a Lisa might only take 20 minutes to learn, but getting on with the job could become frustratingly slow especially when using virtual memory on the sluggish hard drives of the day. 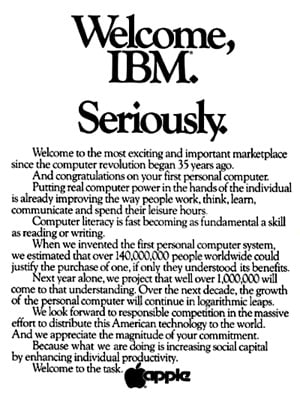 It was this fatal combination of poor performance and high price that was to dog broader acceptance in the business marketplace that Apple had always aimed for. The delays had allowed the IBM PC to get a foothold, too. At the time Apple had arrogantly mused on the Big Blue’s arrival with its 1981 WSJ ad: "Welcome, IBM. Seriously." Undoubtedly, a 64KB IBM PC was inelegant and technically inferior, but its price point made it a hit.

The Mac would also prove that, regardless of hardware prowess, price was an all-important factor for gaining acceptance. Indeed, despite heavy discounting a year on – the Lisa 2 floppy-only was $3,495, Lisa 2/5 $4,495, and Lisa 2/10 $5,495 – to coincide with the Mac’s launch, the Lisa’s star appeared to be fading with sales of a few hundred a month by the end of 1984.

By April of that year, Apple had also devised MacWorks, a Macintosh environment for the Lisa. This, combined with the announcement of Macintosh Office in January 1985 and the Lisa rebranded as the Mac XL with its hard disk advantage, saw a resurgence in sales orders. The pitch was that Macintosh Office would deliver networking featuring a laser printer with the Lisa 2/10 Mac XL functioning as the file server. Even though Macintosh Office never actually materialised, it didn't stop Apple running a TV ad campaign called Lemmings.

Yet, the plan was to only continue the Mac XL from the remaining inventory of parts while essential networking and hard drive additions were engineered for Macintosh itself. With a lack of parts for the rise in new orders, and concerns that they couldn’t be acquired in time, Apple announced the Mac XL was to be discontinued - while Mac engineering manager Bob Belleville and Apple co-founder Steve Jobs were visiting Japan.

Apple had finally found the price point and – with the aid of third-party networking applications – realised the functionality that the corporates wanted, yet missed the opportunity to deliver. The Mac XL and Macintosh Office were essential pieces of the puzzle but the sudden decision to cancel the Lisa 2 three months down the line had industry analysts questioning Apple’s competence.

Even the notion that the Mac would be Lisa's younger brother and the two could work in tandem, couldn't be so. There was no way the Mac could run Lisa's apps, so it was, in effect, a one-way street if you had both machines. Sure, you could easily swap floppies between them, but you'd need to be using software that ran on the Macintosh to make use of the files. Another issue was that the Mac relied heavily on its 64KB ROM. In its Mac XL form, the Lisa acquired a Mac ROM as its original ROM was only 16KB and performed hardware tests and boot instructions. 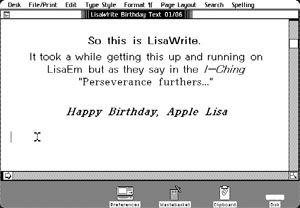 With its initial release, Lisa did find a place in the sun for a time. As a technical achievement, it couldn't help but wow those that came across it – the press included, price misgivings notwithstanding. After booting up, the "paper-like" black-on-white screen displayed a completely new environment and its applications changed working methods for good.

Spreadsheets would never be the same again and neither would the way we relate to computers. This world of icons, folders and office stationery remains to this day and likewise the impression that these places exist on the computer continues to shape our thinking as we engage daily in direct manipulation of computational tasks.

Oh, and the name? It's claimed that Lisa was named after the daughter of an Apple engineer. Lisa is Jobs' daughter's name too, so go figure. Later, Apple invented acronyms to suit this moniker, but the one that sticks in the minds of disaffected users of the time is: Lost Interest Start Again.

If you want to grab a piece of history without grubbing around a landfill, there's a Lisa 2/5 with all the extras in museum piece condition on eBay that will set you back about £16,000. When it comes to return on investment, not even Apple's marketing would have conceived such optimism. 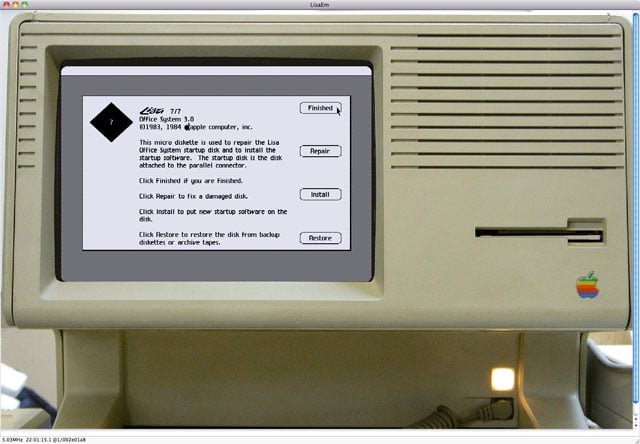 Another way to sample a slice of history is to run an emulator and if you don't have the necessary ROMs you don't need to search very hard to find them. I tried the free LisaEm, which is available for Mac OS X or Windows and hasn't been updated in five years. Still, it works and given the installation quirks and the overall speed, it certainly seemed authentic. If you give it a spin you'll find that even 30 years on, the interface remains familiar and intuitive.

A hat tip to the folks behind the ftp.apple.asimov.net site, a huge resource of information related to early Apple products.