Hartwig Tauber, the director general of the European wing of the Fibre to the Home (FTTH) Council, told The Register that high-speed broadband uptake is sluggish because operators - including BT in Britain - keep finding weak excuses for not investing in big cable rollouts.

"Every time the operators say 'Yes, fibre is the real endgame solution that we need to head for', they find a way to delay and invest again in something in between. They forget that all these investments add up over the years," he said.

The director general believes "the economic development of the entire European Union will suffer" if its 27 member states do not line the streets with fast fibre.

Tauber argued that the existing copper infrastructure - used to provide ADSL2+, VDSL and vectored DSL among other offerings - is a costly obstruction for the operators willing to put serious money behind fibre.

He added: "There's a big problem here because, for example, with a normal ADSL connection you cannot guarantee any speed on it because it depends on the quality of the copper, the distance, how many people are on the network and so on. In non-future-proof networks you have no way to guarantee speed."

His organisation represents 150 outfits doing business in Europe including networking kit giants such as Cisco and Huawei. But interestingly, the FTTH Council does not have any ISPs on its books because, Tauber said, "it's not important who is building the network, just important that as soon as possible everyone in Europe gets a fibre connection with superfast speed behind it". 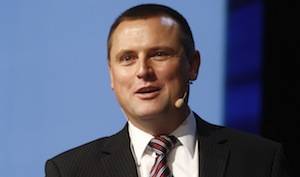 It's clearly in the interests of the corporations the lobby group represents that countries buy faster broadband technology. But the FTTH Council argues that it is struggling to get its message across because incumbent telcos throughout Europe are failing to be "transparent" with their customers about the benefits of fibre.

Tauber said the "up to" rhetoric used by many ISPs in terms of connection speed is highly misleading for consumers shopping around for providers due to inconsistent network performance on the current infrastructure.

For operators unwilling to stump up the cash to fund full fibre installations, fibre-to-the-cabinet (FTTC) technology is far cheaper to deploy: the high-speed optic cabling only has to be fed from the exchange to an on-the-street junction box, and engineers can then use the existing copper wire between customers and the box to connect them to the network.

BT, in competition with Virgin Media, is sinking £2.5bn into what it describes as a "mixed economy exchange". It's rolling out fibre-to-the-premises (FTTP) and FTTC to about 65 per cent of properties in Blighty. But many more will get fibre via shared cabinets rather than blown directly into their homes or businesses. BT has said the split is roughly 75 per cent FTTC and 25 per cent FTTP.

Many believe the argument to be a sound one - the copper is there, why not use it - while others complain that the wire is degrading and should be ripped out - but only if communications regulators in some member states would allow such radical action to take place, that is.

During trials, FTTP proved troublesome, time-consuming to install and expensive to fit for BT, leading to the 25 pr cent split for fibre to premises in its multi-billion investment plan.

The British government has thrown £680m of public cash into a pot, labelled Broadband Delivery UK, to pay for superfast broadband in cities and rural areas where BT and Virgin Media have not found a business case to invest their own money. Ministers and their officials agreed that it is necessary to have mixed technologies in order to hit a target of rolling out at least 2Mbps broadband downstream speeds to 90 per cent of Blighty by 2015.

Tauber believes that "users have no real choice at the moment" about the kind of broadband speeds they may - one day - be able to obtain via a direct fibre service.

Should telcos jump in head first, or is it acceptable for them to fulfil the growing demand for superfast internet access in Europe by taking baby steps when it comes to deploying fibre?

"No, it's not good enough," Tauber said. "The last step to fibre to the premises I admit is a big one - a big investment, a big effort. If we don't start now to really get it done country-wide across Europe customers will be angry."

He cited examples such as games consoles, smart TVs and other devices hooked up to the internet that are need more and more bandwidth from networks that he argues will soon not be fit for purpose.

"The argument that 'we have this infrastructure, we should use it' is an OK one from the point of view of BT to make a profit but from the consumer's side or the government's side it should not be seen as a given because this is really the tail waving Mr Dog at the end," Tauber said.

In a dig at the UK government's approach to funding broadband rollouts - BT has been the only telco to successfully bid for taxpayers' cash to date - Tauber argued:

There was a big chance to give more funding to regional projects but it would have been more complicated so the government here didn't go with it. Following a company's interests makes the policymakers' lives easier, but this is not necessarily good for customers.

Tauber told El Reg that he quietly smiled to himself the first time he heard the UK's Tory-led coalition government proclaim that it would have the "best" superfast broadband network in Europe by 2015.

"I thought what kind of objective is it to say we want to have the 'best' as long as you don't define what 'best' means," he said.

"The closer the UK comes to 2015 the more the perimeters for defining 'best' are modified and modified to fit into the claim that it has been achieved and I think this is mak ing the life [of those policymakers] too easy. Definitions should have been in place from the start."

In that sense, he thinks Britain will reach its target, but he wondered, given the shifting nature of the definition of “best”, if it will be something for Whitehall to celebrate. As for how far off Europe is from having fibre networks deployed, Tauber said copper will still be used by incumbents a decade from now.

"If it's about the market we see today then there will be copper in the ground as long as possible," he added.

"Even if it goes slowly, I would say within the next 15 years the copper should disappear. But it's a long time to go and it might be too late. I really think if we don't move on soon than the economic development of the entire European Union will suffer."

Tauber warned that it is wrong for governments to assume that next-gen mobile broadband 4G will pick up the slack when a big hole remained in fibre investment. That wireless technology can only ever be "complementary because it cannot replace fixed line connections", he said. ®

Cost of Living Pay Rise due in January, if unionised workers vote for it in consultative ballot
Networks29 Nov 2022 | 19