Burn a keyboard on your arm

Google has filed a patent for mounting twin lasers on the sides of a pair of glasses to display a keyboard on a user's body parts and use a camera to track a hand's gestures for control.

"In another example, the camera may detect when the display hand is moving and interpret display hand movements as inputs to the virtual input device, and/or realign the projection onto the moving display hand."

The patent filing shows the lasers projecting a numeric keyboard onto the palm of the hand, or highlighting function buttons on the forearm. By looking at the relevant body-part, someone wearing the specs – which look very like the Google Glass prototypes – could find some way to input data beyond speech recognition and use gesture controls on the eyewear's lenses. 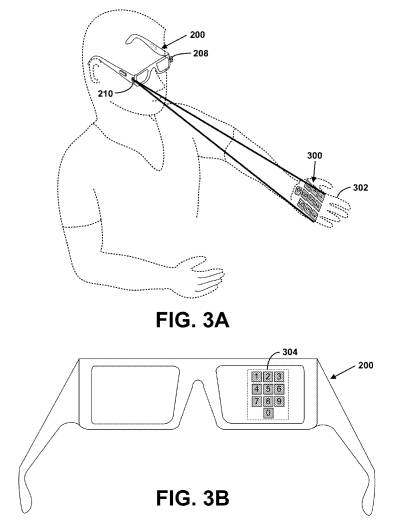 Laser projection of keyboards is a decade-old idea, but this might be the way to solve a fundamental problem with Google's hardware: reliable input. As British pranksters (among many) have pointed out, Glass has significant problems in terms of user control.

Google management is strongly behind making the Glass project a success, and Sergey Brin is seldom seen at public events without a set on. But he has private security; given the $1,500 price tag on the developer prototype and the US proclivity for street crime, the hardware could be a mugging magnet.

What isn't covered in the patent filing is the issue of screen burn. As anyone with a plasma TV will tell you, a station's logo can permanently mark a section of the screen, but the lasers involved are certainly low-power enough not to cause problems.

Nevertheless it's in interesting idea. The patent has yet to be approved, but if Google can come up with a working prototype the results could be very interesting indeed. ®