'Let's turn on the juice and see what shakes loose'

Earth's nearest supergiant red star Betelgeuse is on its way to a spectacular collision when it smacks into a "nearby" dust bar. The whole process will take thousands of years, however. 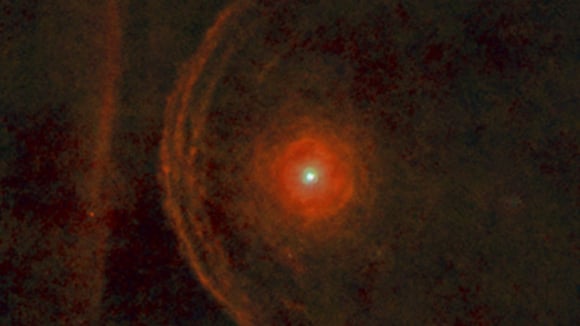 The European Space Agency's Herschel telescope has snapped a new image of Betelgeuse, which is in the Orion constellation, in the visible night sky, showing an obstacle in the path of the brightly shining sun.

The orange-red star is a thousand times the diameter of our Sun and shines a hundred thousand times more brightly, but its expansion into supergiant hunk has come at a cost. The body has shed a significant amount of its outer layers, which can be seen in Hershel's picture.

The infrared view shows how the star's fierce winds are whipping across the surrounding space, creating a bow shock around Betelgeuse as it hurtles through the cosmos at 30km a second. This series of broken dusty arcs lie in front of the star, showing its direction of motion. Around the star itself lies a lopsided halo of material, likely to have resulted from localised, clumps of dusty debris.

But further out in space, a bar of what appears to be more dust is lying right across Betelgeuse's path. Boffins have previously thought that this bar could also have originally come from the star, but analysis of this image suggests that it's either a linear filament linked to the galaxy's magnetic field or the edge of a nearby interstellar cloud, lit up by the star's bright light.

If the bar is a completely separate object, Betelgeuse's outer arc will crash into it in just 5,000 years and the red star itself will follow, around 12,500 years later.

The supergiant is expected to approach supernova within the next million years. ®