Let's take a closer look at those 'disappointing' numbers, shall we?

As these words are being typed, Apple's stock is taking a beating, down around 10 per cent from its $514.01 Wednesday close, in reaction to what Wall Street has clearly characterized as disappointing financial results for the first quarter of Apple's 2013 fiscal year.

May your humble Reg reporter take this opportunity to point those Wall Street moneymen at some of what Apple CEO Tim Cook rightly called "a lot of impressive numbers" during his conference call with reporters and analysts after the Q1 2013 number were released?

Even the most rock-ribbed Apple-hater must grudgingly agree with Cook that those numbers are indeed impressive.

The one number that seems to have especially spooked investors was Apple's net income for the first quarter of 2013, which it reported as a rounded figure of $13.1bn (the company's more detailed SEC filing won't be available until tomorrow, if tradition holds). During the same quarter last year, net income was $13.06bn. That figure, of course, rounds up to $13.1bn, but Apple's announcement of its Q1 2013 results refers to its most recent quarter as having "record quarterly net profit," so the figure must be at least a smidgen over the net profit during same quarter last year.

And that's where things get interesting. As Apple's CFO Peter Oppenheimer, who shared the call with Cook, pointed out, the quarter reported on Wednesday had 13 weeks; last year's Q1 had 14 weeks. "As such," Oppenheimer said, "average weekly revenue was $4.2bn in the current-year quarter, compared to $3.3bn in the year-ago quarter." That's a per-week revenue increase of 27.2 per cent.

Had Apple enjoyed another week of sales, that $13.1bn net income would almost certainly have been higher.

As Cook pointed out, other factors held down revenues, and therefore net income. A shortage of iMacs, for example. "We left the quarter with significant [his emphasis] constraints on the iMac," he said. "And we believe — we know – that our sales would have been materially higher if those constraint would not have existed." 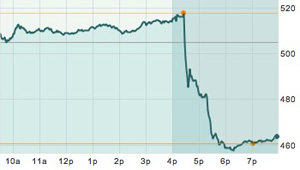 Of course, balancing supply with carefully projected demand is one thing that keeps CEOs in their jobs, but we thought it useful to point out that Apple's sales would have been higher had Cook & Co. better managed that task.

Another factor played into the flat net income: the fact that Apple's gross margin for the just-completed quarter was 38.6 per cent, and in the year-ago quarter it was 44.7 per cent. As Oppenheimer explained, "The iPad mini gross margin is significantly below the corporate average." Even though the unexpectedly high popularity of the iPad's li'l brother caused a shortfall in supply – likely combined with other supply-chain problems neither Cook nor Oppenheimer discussed – it still sold enough units to bring down the overall quarterly gross margin.

Supplies of the iPhone 4S and iPad mini, Cook said, will balance with demand during the current quarter. "On iMac," he said, "we're confident that we're going to significantly increase the supply, but the demand here is very strong and we are not certain that we'll achieve a supply-demand balance during the quarter."

That's sure to spook investors further, but with all of the other numbers in mind, we find ourselves agreeing with Robert Hof of Forbes, who wrote on Wednesday that "despite today's rampant doubts, it seems premature to assume Apple's long run is over."