Asteroid mining and a post-scarcity economy

Show me the (lack of) money 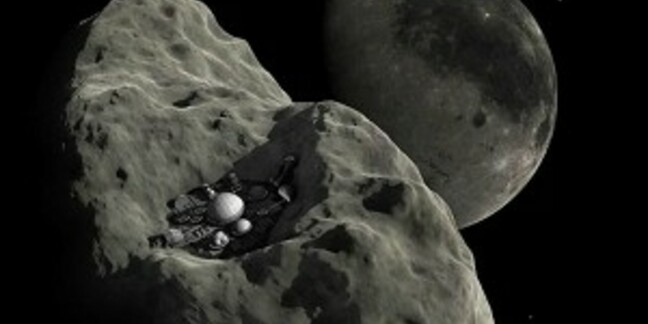 In the last year, we've seen two commercial ventures announce different plans to harvest the material bounty of the solar system by mining asteroids. So are we at the foothills of a post-scarcity economy or are people blowing a lot of hot air on the latest fad du jour?

In April, Planetary Resources announced a scheme to fire off water and platinum mining equipment onto Near Earth Objects (NEO), after first sending out a series of smaller telescopes to find suitable candidates for mining. The first of these Arkyd Series 100 spacecraft should be in orbit by 2014, with probes to land on asteroids launching by 2016, and the first mining robots in place by 2022.

The firm, backed by unspecified funds from Google's Larry Page and Eric Schmidt and former Microsoft chief engineer and two-time space tourist Charles Simonyi, is taking a long-term view to the business and has said it expects many failures along the way. Little mention was made of what the cargo might do to metals markets.

At the time, this El Reg hack expressed the view that the timescale that Planetary Ventures had set was overly ambitions, but on Tuesday Deep Space Industries (DSI) came up with a slightly different business plan that the company claims will have it returning materials to orbit within the next few years.

DSI's plan is to send out a series of FireFly probes in 2015 to likely NEO targets, of which the company says it has 9,500 mapped out. Around 1,700 of these resource-rich piles of rubble are easier to get at than the moon, it says. They can be mined for water, minerals, and petroleum products, with nickel the first target, the company said at its official launch conference.

By 2017, larger DragonFly probes will be sent out on two- to four-year missions that will employ a unique 3D printing system to process asteroid ore and produce pure nickel, which could be stamped into specific parts or ingots. The probes will collect 50-100lbs of material and return it to orbit – but there it will most likely stay, for use as building materials.

DSI says it has designs for robots that can be sent off to harvest not just nickel, but also other metals, liquids, and petroleum products. The end goal is a series of machines such as those proposed by US physicist John von Neumann, which could self-replicate and strip asteroids down to nothing.

Whatever the success or otherwise of such a plan, DSI could be a boon for the finance industry. Lloyds of London, founder of much of the modern insurance industry, was started by the well-heeled traders who gathered in coffee houses to bet on the likelihood of spice and slave trading trips to the Orient and the Americas.

DSI said it wouldn't look to go public until the first payload of material was on its way back on a DragonFly probe. El Reg is sure that the brokers of Wall Street and London will find interesting financial instruments for betting on the outcome of such prospecting missions.

DSI's long-term goal is to use the material harvested to build larger orbital facilities, with automatic mining units sending back parts to be assembled. DSI said that the orbital stations can be used to beam solar power back to Earth, manufacture goods, and replace the need for communications satellites around the globe – and that they could be in place by 2025.

In terms of roll-out, DSI makes Planetary Resources' plan look like a timid toddler's first steps, but based on what the company let slip on Tuesday, it may turn out that DSI falls on its backside.

The company admitted that it has not yet built a functioning version of its 3D printing technology that works on Earth, much less one that works in zero gravity. The mining systems haven’t been fully designed, either, but DSI is confident these can be sorted out in time. Still, the plan depends on a lot of ifs and maybes.

Will either company's plan work? I have my doubts. The need is certainly there and it's frustrating to more and more people that humanity is starving in the midst of plenty. Most likely, both of these ventures will go titsup – most early players in an industry do – but they could be laying the groundwork for the first people to make asteroid mining a going concern.

It's another massive leap of faith to predict that the resources of the solar system will bring on the kind of post-scarcity society that DSI was enthusing about on Tuesday. It's entirely possible that such a utopian ideal will never happen, given human predilections. But it's worth a shot.

"Welcome to the revolution," predicted DSI chairman and long-time space activist Rick Tumlinson at the launch. We shall see. ®

Statement smacks of a cover-up, as Bruce Willis disappears