Symantec's latest CEO plans a "revolution" to create a 4.0 version of the firm by slashing bureaucracy, shaking up its portfolio, renewing a direct sales push in the enterprise, and cutting staffers.

An insider told Bloomberg that the reorganisation could impact up to 1,000 employees. The plan was formed by Steve Bennett, who spent his first six months in the job on a globe-spanning whistle-stop tour meeting partners, customers and analysts to hear feedback on the firm.

The change is starting at the top: Bennett, who seized the reins of global sales in the last quarter and is also company president, will step down as chairman. Board director Dan Schulman will slip into the chairman's office.

Bennett, the former boss of Intuit who replaced ousted Symantec CEO Enrique Salem in July, said he had tried to understand why the business was under-performing. Bennett has also created a new "Office of the CEO" - a team of execs including a CFO, president of products and services and a COO - to help him make decisions more effectively.

Feedback from some quarters was that Symantec is a "company of promises ... probably unfilled promises, and that's why we are going to change with Symantec 4.0," said Bennett.

Symantec is going to focus on 10 "key areas" that combine existing tech and services into "solutions", but said customers will be able to buy individual products. This process will take two years, he added.

Bennett claimed Symantec is not delivering "technical support experiences" across the globe and dealing with that is work in progress.

Like many large companies the software maker is also hamstrung by bureaucracy, the boss admitted.

"We don't have a system; our process, our technology, the tools we have, our knowledge management, our sales force is not empowered and freed up to sell. They're doing too much administrative stuff, they're doing too much internal negotiation," he said. The organisation is a "bit demoralised" because some hard-working folk "felt like they were losing" and Symantec has become an exporter of talent", the chief added.

Bennett said the software biz will continue to "rely heavily on the [distribution] channel to manage current customers" and revealed this will "free up" the direct sales guys to generate "new business".

At the top of the classic sales pyramid, in the corporate enterprise, Bennett said the firm would deploy "Symantec resources calling directly on these customers with partners involved on a customer-led basis".

"On commercial, we're basically going to have self-contained teams focused on the channel, working with our partners to grow their business and grow our business in collaboration with a philosophy that says 'we're going to work together to win in the marketplace, and we'll split the economics in some way that's fair'."

He said sales peeps at the coal-face will be given "greater empowerment" as Symantec cuts the lines of report: "As such there will be fewer executives and middle management positions, resulting in a reduction in the workforce. This process is expected to be completed by the end of June 2013."

This will result in estimated severance payments of roughly $275m in fiscal 2014.

Symantec's financial numbers under the spotlight

The company this week filed results for fiscal Q3 ended 28 December with turnover up 4 per cent year on year to $1.79bn - the highest organic growth rate seen in more than four years.

There was a hiccup in the consumer market - sales slipped 1 per cent - but this was more than offset by gains in the Security & Compliance and Storage and Server Management units.

The bottom line didn't fare as well, falling 12 per cent to $212m and clearly this, past quarters numbers, and the feedback from customers, has spooked Symantec. 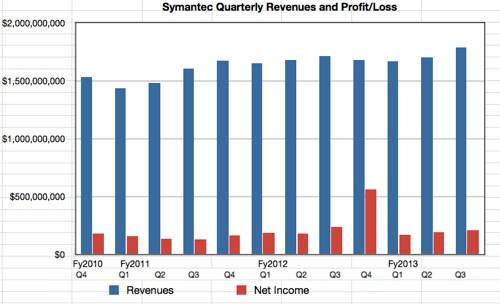 "We have tough competitors," said Bennett, "so this work won't be an evolution. We can't get there through incremental steps to try and move to where we need to be. So no evolution, Symantec 4.0 is all about a revolution."

As for rumours that Altiris will be offloaded, there was no word from Symantec of a sell-off. ®