And Larry has slapped the Oracle labels on them, too

Japanese IT giant and long-time Sparc partner with Sun Microsystems and now Oracle has let slip the details on its "Athena" line servers based on its own sixteen-core Sparc64-X processors, which bear the same code-name inside Fujitsu. And it looks like Oracle is going to be reselling them, too.

It is not clear if this is an accident or just a soft launch in Fujitsu's stomping grounds in anticipation of a larger event with big-wigs wagging their tongues. Fujitsu has not issued press releases on the new Athena iron, and nor has Oracle. Larry Ellison's Plaything has also not put up any feeds and speeds of the new Sparc M10 systems, as the boxes are called, on the Oracle site, either.

The feeds and speeds of the initial four servers using the Sparc64-X processors have been published on Fujitsu's Japanese site, and as you can see there are three machines. There is a single socket pizza box, a quad-socket fatter rack box, and a pre-configured rack with sixteen of the fatter quad-socket boxes all sold as a single unit.

Fujitsu was showing off the Sparc64-X processors back at the Hot Chips 24 conference last summer, the same time that Oracle was talking about its own sixteen-core Sparc T5 chips based on its S3 cores.

Oracle's T5 chip, which was expected last fall and looked to be coming out early, was pushed out back out to its original early 2013 schedule during Oracle's OpenWorld partner extravaganza last October. That was also when Fujitsu senior vice president Noriyuki Toyoki previewed the Athena server design, what we now know as the Sparc M10-4 and the extended Sparc M10-4S symmetric multiprocessing machine.

That latter Fujitsu box is made from lashing up to sixteen of these Sparc M10-4 servers together using an unnamed interconnect. This interconnect could be derived from the "Tofu" 6D torus interconnect used in the 10.8 petaflops massively parallel supercomputer built by Fujitsu for the Japanese government, and Fujitsu certainly wants to give that impression. But the schematics for the interconnect obtained by El Reg looks more like a distributed crossbar interconnect than it does like Tofu.

At the time Fujitsu was talking about the Athena servers last fall at OpenWorld, it did not say that Oracle would be reselling the boxes, mainly that it was partners in their development - make of that what you will.

Oracle was also telling customers privately at OpenWorld that it had its own six-core, fat cache Sparc M4 processor in development. This M4 processor has beefier versions of the S3 core that is used in the Sparc T5 chips, and have 48MB of L3 cache shared across those cores.

The important thing is that this Sparc M box coming from Oracle will have 32 sockets and 1,024 memory slots. That yields 192 cores and perhaps 32TB of main memory in a single system image. This could be one big killer in-memory database engine.

It looks like Oracle will be selling two kinds of Sparc M machines, one based on its own M4 chips and the other based on Fujitsu's Athena Sparc64-X processors. Why Oracle and Fujitsu could not just come out and say this two years ago is a mystery. Fujitsu and Oracle like to be inscrutable, and this perhaps annoys the crap out of their customers. It certainly does their competitors.

The Athena chip has all of the extra HPC-ACE instructions that were put into the K supercomputer to speed it up and also has hardware-assisted virtualization circuits for the first time, presumably to run logical domain partitions like the Sparc T series chips from Sun and Oracle have been able to do for years. The Sparc64-X is implemented in Fujitsu's own 28 nanometer wafer baking processes and has 2.95 billion transistors onto its die.

The latest Fujitsu processor has sixteen cores with a top speed of 3GHz and has 24MB of shared L2 cache across those cores; each core has two threads for doing work. The chip has two DDR3 memory controllers and one PCI-Express 3.0 controller on the die as well.

There is a five-port NUMA interconnect also etched onto the die, which lets four sockets stick together in a single system image without any additional chipset. And with the distributed crossbar interconnect, Fujitsu can push it up to sixteen nodes in an SMP/NUMA image.

Putting our trust in Google Translate, the baby Sparc M10-1 server has a single socket with one Sparc64-X processor; it is 1U high and has a standard rack width.

The processor has all sixteen cores active – it is not some kind of half dud, although it would not be surprising to see Fujitsu offer such a configuration to make better use of chips – and they run at 2.8GHz, close to the top speed. The L2 cache memory on the processor in the Sparc M10-1 server tops out at 22MB, however.

The machine supports up to 512GB of main memory and has room for either eight SAS disk drives or eight SSD units across the front if you decide to ditch the DVD drive. If you want the DVD, you have six media bays. The fattest disks weigh in at 600GB (the same as in Oracle systems sold today). 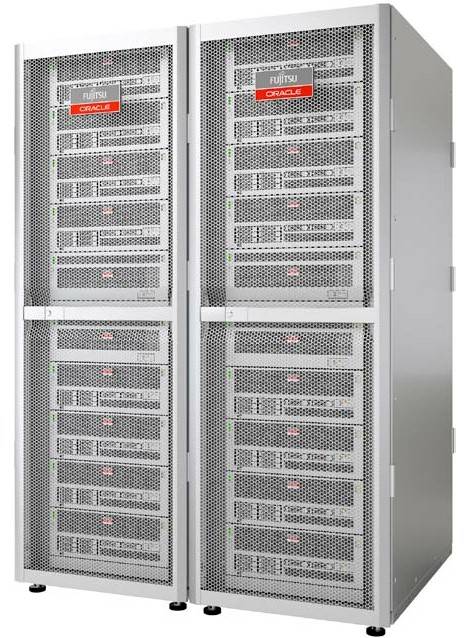 The Sparc M10-4 is a four-socket box, as the naming convention suggests, and it comes in a 4U rack-mounted chassis. This server has 22MB of L2 cache per processor and the cores run at the 2.8GHz, just like in the M10-1.

Because the Sparc M10-4 needs lots of airflow across the processors and the maximum of 2TB of main memory it supports, it still only has eight drive bays, which again can be either SAS disks or SSD flash drives. The extra height also gives Fujitsu more space to add up to eleven PCI-Express 3.0 slots to the box. This machine has four Gigabit Ethernet ports just like its smaller sibling.

It is interesting to note that there is not a Sparc M10-2 two-socket box, and you would think there would be a 2U workhorse machine with 32 cores that could compete directly against twos0cet x86 servers. Go figure. Maybe Oracle and Fujitsu want to leave some space for future Sparc T5 systems to snuggle into the product line?

Fujitsu's online data sheet suggests that the Sparc M10-1 is an application server, while the M10-4 is ideal for "midrange server data center consolidation" as it was translated into English by Google. That probably means it is the replacement for the existing M4000 and M5000 midrange boxes using the quad-core Sparc64-VII+ processors.

The Sparc M10-4S is a cluster that uses that distributed crossbar interconnect to link sixteen of the four-socket nodes into a beast that spans two server racks and that has 64 sockets, 1,024 cores (five times as many cores as Oracle will do with its 32-socket Sparc M4 machine later this year), and up to 32TB of main memory across those nodes. This looks like the replacement to the M8000 and M9000 high-end SMP boxes from Fujitsu. The Sparc M10-4S has 128 media bays, 128 PCI-Express slots, and 64 Gigabit Ethernet ports.

If Fujitsu published pricing for these machines on its web site, it is not obvious. But a bunch of sites in Japan here and there, for instance, were briefed by Fujitsu and did have entry-level pricing for the three machines that they all agreed on.