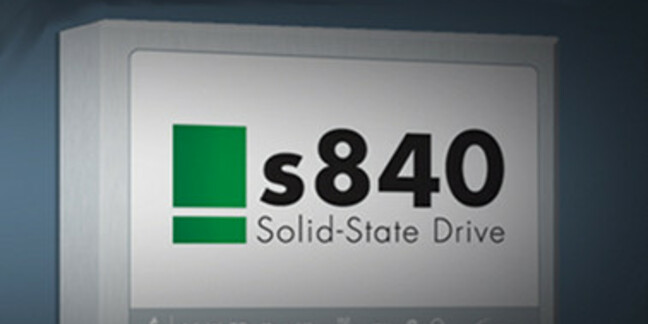 It has a five-year warranty with endurance rated at ten full drive writes a day, and the usual battery of wear-levelling, flash management, power management and data integrity checks needed in drives of this class.

The second STEC product is the s1120, an up to 2TB PCIe flash card in what used to be called the Kronos line. It comes in 480GB, 960GB and the 2TB capacity point, using MLC flash. There is a faster and smaller 240GB SLC version. We're not given random read and write IOPS numbers for the MLC product but are told it does 1.4GB/sec in sequential reads and 600MB/sec sequentially writing; that's quite a bit quicker than the s840 SAS drive. As a comparison Fusion-io's 1.28TB MLC ioDrive Duo does 1.5GB/sec sequential reads and 1.1GB/sec sequential writes.

The company has also refreshed its EnhanceIO drive-agnostic caching software and added non-disruptive write-back caching to improve "performance while reducing latency with improved data integrity". STEC has also added usability improvements and a GUI through which users can view stats and analytics.

STEC's 2TB products should ship in February. Both the SSD and PCI card products are available in unlimited write versions, according to STEC, a logical impossibility according to others. The 2TB s840 prices start from $7,995 and the 2TB s1120 from $9,425. The EnhanceIO cache software costs $295 for Linux and $495 for Windows. It's available now and you can download it from here. ®

Good news? There is no good news