But while the humans are passively refreshing Youtube and gurgling at footage of kittens riding tortoises, the cats themselves are engaged in an unprecedented campaign of bloody extermination which seems set in the near future to wipe huge areas of the planet largely clean of life.

Cats kill a total of 1.4–3.7 billion birds and 6.9–20.7 billion mammals annually in the USA alone, according to an estimate by conservation scientists in a new paper published in the journal Nature. 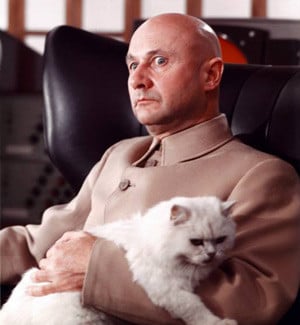 He's not the dangerous one. Cats kill up to 23 billion animals a year in the US

And cats are killing cute rare animals as well as pests like rats. Domestic cats are the prime menace to shrews, chipmunks and voles in America, stated the authors, Scott R Loss, Tom Will and Peter P Marra.

More birds and mammals die from cats than from any other cause, including car strikes and pesticide, says the paper.

It is largely un-owned cats, as opposed to owned pets, that cause the mortality. Owned ones presumably have been kept inside, fed pasta and taught to play the piano.

The scientists estimated the figures by running a model based on a new cat murder algorithm. The research authors described themselves as stunned by the scale of the bloodshed they discovered.

According to the New York Times, the new data has increased pressure for a trap-neuter-return program for the nation's feral cats. The hope is that this will humanely reduce the wild cat population.

Others argue that feral cat colonies should be enclosed, and that domestic owned cats should be kept indoors.

The scientists urge "scientifically sound conservation and policy intervention" to reduce the impact of the murderous moggies. ®

'The impact of free-ranging domestic cats on wildlife of the United States', by Scott R. Loss, Tom Will & Peter P. Marra, is published in Nature.