Review Now that Microsoft has kicked off its gradual, rolling launch of Office 2013 and the accompanying refresh of the subscription-based Office 365, the time has come to ask the hard questions: Do I upgrade? And if so, which version is right for me?

All but lost in all the hype and hoopla over Office 365 Home Premium during Tuesday's launch event was the announcement that the retail versions of Office 2013 have finally shipped. Although they were released to manufacturing in October, Microsoft took its sweet time bringing them to market.

Redmond reps now tell El Reg that as of Tuesday, the Home & Student, Home & Business, and Professional editions of Office 2013 are all available through more than 450 retailers worldwide – you can buy them today.

The thing is, however, you may want to hold off.

We took the Office 2013 applications out for a spin in the first part of our review of the suite in November, and what we found was a mixed bag.

The update brings the usual grab bag of tweaks and minor new features, but nothing truly groundbreaking. The touch-enabled UI is a plus for tablets, but tablets don't really make for the best content-creation devices. And while Microsoft has taken great pains to integrate the suite with its online services, it's still not clear that a cloud-centric Office is really something most customers want. 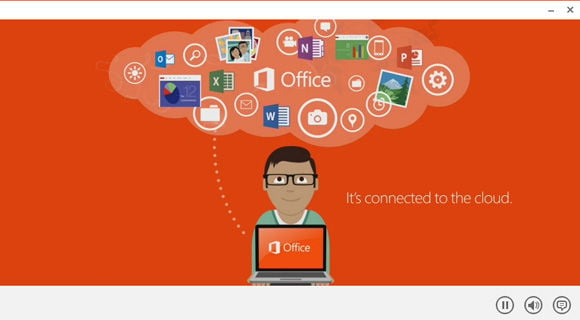 The real game-changer for this latest Office refresh, however, is the updated Office 365. Beginning on Tuesday, you can now subscribe to Office desktop software delivered entirely over the internet. No DVDs. No License keys. Just a nice, regular check you write to Microsoft.

It's no secret that Redmond would love its customers to switch to the subscription model. To that end, it's been dangling a variety of unique incentives for Office 365 converts, ranging from extra online storage to exclusive feature updates.

But if Microsoft is so desperate for customers to switch, it must be because it's planning to make out like a bandit, right? Can the subscription model possibly make sense from a customer's perspective? The answer, surprisingly enough, is maybe – and that's where we'll focus for this second dive into the new Office.

Will a subscription save me money?

Naturally, the first question on everybody's minds will be how much the subscription version of Office will cost compared to the traditional, perpetual-license version. So let's cut to the chase: Signing up for Office 365 will probably mean you'll be sending more money Redmond's way than you did before.

A retail copy of Office 2013 Professional – the all-inclusive version of the suite – costs $399.99. The various Office 365 subscriptions offer the same software bundle for a monthly or yearly fee (yearly is a bit cheaper). The important part, however, is that to keep using the Office 365 version, you have to keep paying the fee. If you don't, the applications will become feature-limited and eventually stop working.

Microsoft puts out a new version of Office about every three years. It quit offering upgrade discounts as of Office 2010, so everyone who buys the newest version of each edition pays the same price. Assuming the list price doesn't go up, then, if you buy the retail Office 2013 Professional today, in three years' time you'll pay another $399.99 to get the next version.

Office 365 Home Premium, on the other hand, costs just $99.99 per year. If you go that route, you'll be able to use the same set of Office apps over the same three-year span, but you'll pay only $300. Better still, you'll pay in installments instead of all at once. 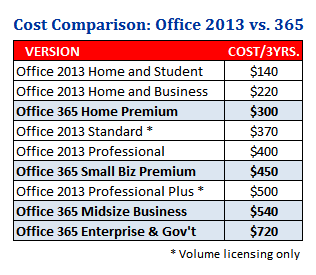 If cost is your top concern, Office 365 may not be your best bet

But wait, there's more – money, that is

But hold on; this cost analysis relies on two false assumptions. First, it assumes the typical Office customer upgrades immediately to each new version of the suite, like clockwork, when in fact most do nothing of the sort. Many wait to upgrade, stretching out the value of their licenses, and some skip whole revisions altogether.

Second, it assumes that every customer needs or wants Office Professional. Many home users will never have any use for more business-oriented components of the suite such as Access, Outlook, or even PowerPoint. For them, a better bet might be Office 2013 Home & Business at $219.99, or even the Home & Student edition for just $139.99 – each significantly cheaper than a 3-year Office 365 subscription.

Things look even worse for business customers, because their subscriptions cost more. Three years of Office 365 Small Business Premium will cost $450 per head – already more than the list price of Office 2013 Professional. Office 365 Midsized Business costs $540 per head over the same period.

Enterprises have it worst of all. Microsoft says the Volume Licensing version of Office 2013 Professional Plus that big businesses might normally buy typically costs $500 per head. Three years of an equivalent Office 365 Enterprise & Government subscription run a whopping $720 per head – a 44 per cent premium over the perpetual-license model.

So why would anyone bother? As it turns out, Office 365 has a number of benefits. Some are natural consequences of the software as a service (SaaS) business model, while others are artificial – meaning Microsoft is throwing you a bone.

Next page: You get more than you pay for (or need?)
Page: