The familiar black and white motif that has adorned the Space Shuttle fleet is not so much for styling, but a consequence of the three types of thermal protection materials employed to protect it from the immense heat of re-entry. White tiles are a low density silica material known as LRSI (Low-temperature Reusable Surface Insulation) which can withstand temperatures up to about 1200°F. The black tiles on the underbelly of the orbiter are dubbed HRSI – you guessed it, High-temperature Reusable Surface Insulation – and are made of a similar voided silica compound. 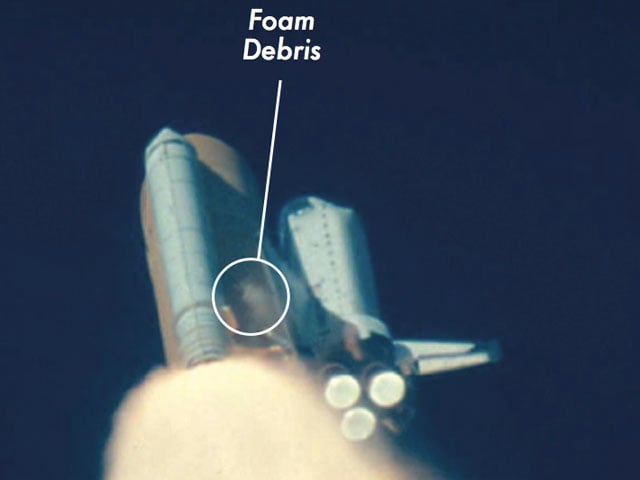 These tiles are unique in that not only do they insulate the vehicle, but they also reject heat absorbed by radiation through emission in a different wavelength. This makes them very effective on most of the outer skin, but they cannot survive the extreme temperatures on the leading edges. HRSI tiles reach their limit of stability at 2300°F, and as such the wing edges need the protection of RCC panels (Reinforced Carbon-Carbon). This is a carbon-ceramic material, similar to that used in Formula 1 braking systems.

At T+81.7 seconds, video footage showed that a chunk of foam parted ways with the external tank support and collided with the left wing. Measuring at 21-27in long and 12-18in wide, its impact at around 500mph left a lasting and ultimately fatal impression. However, the foam strike was not observed in real-time and was only discovered during review of the launch footage, as the Columbia mission continued. Given that no abnormal readings were reported by any of the on-board sensors, it could have easily gone unnoticed.

Analysis of the tapes suggested that the impact occurred on the underside of the wing and if any damage was sustained, it would be to the black HRSI tiles. The NASA guidelines for such a situation mandated simulation of the event with the Crater analysis program. Crater was developed as the result of a series of tests performed in 1999 following the conclusion of reports on extensive tile damage in previous flights. Inputting data gathered from the video generated a result from Crater that this would not result in a safety of flight issue. Columbia would sustain re-entry. 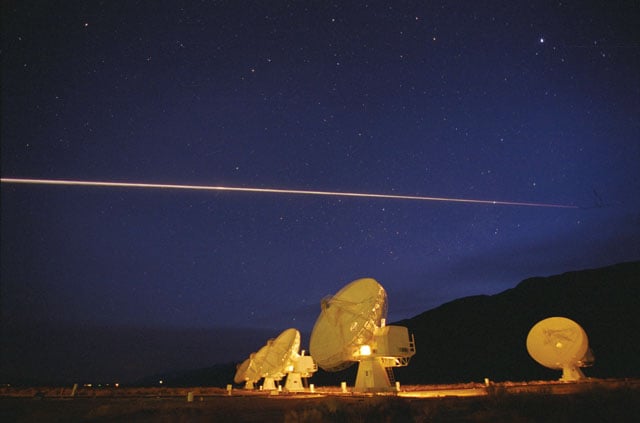 Not everyone was convinced with the Crater result though. A NASA engineer is quoted from an email exchange as writing:

“As a reference if the debris was 1.211kg... the kinetic energy would have been equivalent to a 500lb safe impacting at 75mph. If the debris was 28.7kg, that would be the equivalent of a 500lb safe hitting the wing at 365mph. If the wing is off.. or has a big hole in it you're not going to make the runway. Any more activity today on the tile damage or, are people just relegated to just crossing their fingers and hoping for the best?”

Options for further observations were suggested, but summarily dismissed by bureaucrats and bean counters, as too costly and unnecessary given the Crater analysis findings. A spacewalk was an obvious solution, but not something that was planned for the mission, thus given the associated risks it was not deemed favourable. Also on the cards were remote observations using ground based telescopes or US Navy spy satellites, but access to these systems was also refused on a cost basis. 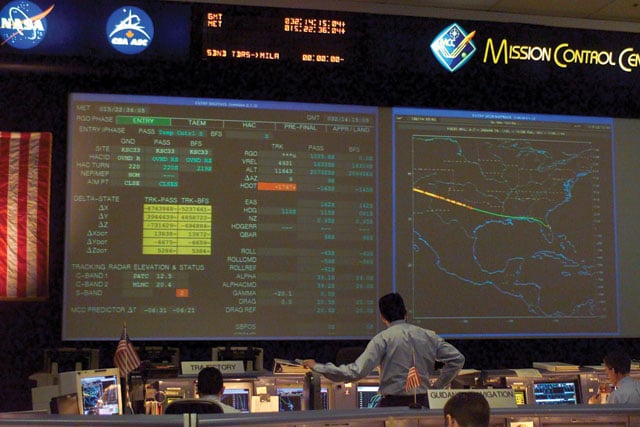 16 days after launch saw the successful completion of all mission objectives and at 08:10 EST Houston issued the GO command for Columbia to begin de-orbit procedures. Following a 2mins 38secs burn and roll manoeuvre the Shuttle crossed the 400,000 feet atmospheric entry point at 08:44. Careening across California at Mach 23 (15,000mph at 230,000 feet) the orbiter passed through the point of peak heating, with wing temperatures exceeding 2800°F at the leading edge. 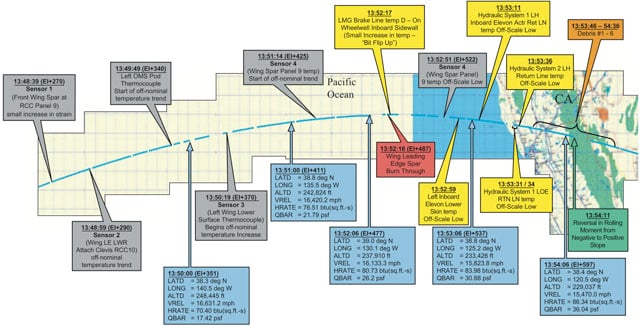 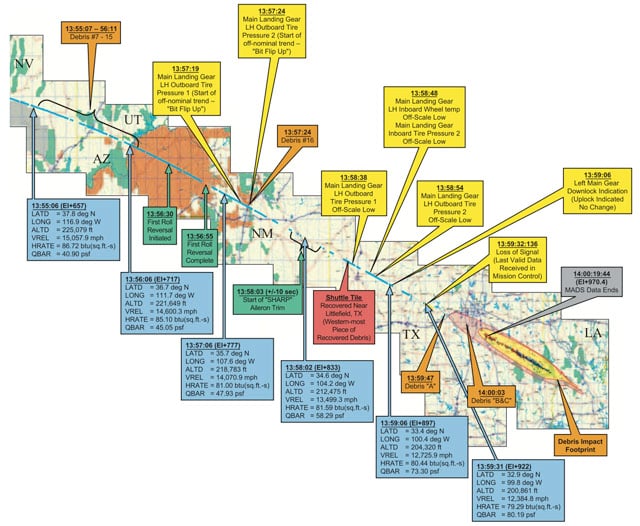 Public observations indicated that the first debris separation was sighted at 08:53:46 EST, but re-entry appeared entirely routine at Mission Control until 08:54:24. At this point four hydraulic sensors in the left wing reported off-scale low readings, indicating failure. Five minutes later total loss of landing gear tyre pressure was reported. The crew’s response to this news was truncated at 08:59:32 and the vehicle is known to have been disintegrating as of 09:00:18, as witnessed by ground observers.

Columbia is lost: Visual confirmation from both sides

Twelve minutes passed while NASA attempted to regain contact with Columbia until visual confirmation was received that the craft had been lost. At this point, Flight Director Leroy Cain issued the command to seal the facility and preserve all data, documents and communications for the impending investigation.

Next page: The Investigation
Page: