The troubled rocketeers at Sea Launch have had another setback with the failure of its latest launch after just 40 seconds of flight, leading to the destruction of both the delivery vehicle and its expensive satellite payload.

"We are very disappointed with the outcome of the launch and offer our sincere regrets to our customer, Intelsat, and their spacecraft provider, Boeing," said Kjell Karlsen, president of Sea Launch in a statement of the obvious.

"The cause of the failure is unknown, but we are evaluating it," Karlsen said. "We will do everything reasonably possible to recover from this unexpected and unfortunate event."

The cause of the problem with the Zenit-3SL rocket used in the launch hasn't been disclosed, but video appears to show a main-engine shutdown. This was confirmed by a space industry source, who told the Interfax news agency that the booster went into emergency mode and cut out to avoid an explosion.

"The rockets detected an abnormal situation linked to platform instability from the very start, and then switched the engines over (to operations) aimed at steering the rocket away from the platform," the source said.

The Intelsat 27 communications satellite was intended for geosynchronous orbit over the Americas and Europe. The rocket and its payload fell back into the Pacific and is assumed to have sunk.

Sea Launch is a commercial venture that assembles and launches rockets from a floating platform as close to the equator as possible. This allows rockets to carry a heavier payload by using the maximum impetus from the Earth's rotation, and to be able to fly the most efficient course into geosynchronous orbit.

The company was set up as a joint venture between companies in Norway, Russia, Ukraine, and the United States, but is now majority-owned by Russian stakeholders after the company went into Chapter 11 in 2009, shortly after an earlier failure when a rocket blew up on its floating launch pad. 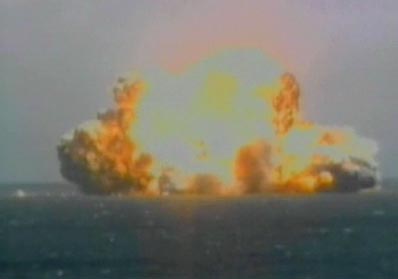 Sea Launch has set up an investigating board to examine this most recent failure, which is the organization's fourth in 14 years of launching. IntelSat says the loss of the satellite, which was intended to replace its Intelsat 805 and Galaxy 11 orbiters, will not harm its service.

"We are clearly disappointed with the outcome of the launch," said Intelsat CEO David McGlade in a statement. "The cause of the failure is unknown, but we will work closely with our launch and manufacturing partners to determine the necessary next steps." ®

Break out the poutine! SpaceX flings triple serving of Canadian satellites into orbit

Next up, Falcon Heavy and thinking about those Crew Dragons for Bigelow