Report: Over 1.5 million UK drivers will have hydrogen cars by 2030

Hydrogen fuel cell cars won’t hit the market until 2015, but with the right investment in infrastructure, more than a million and a half of us could be driving one by 2030, with annual sales topping 300,000 vehicles, an evaluation conducted by government and industry has forecast.

A timeline drawn up by UKH2Mobility - a consortium of 11 car-makers, fuel cell specialists and hydrogen producers, three government departments and one fuel retailer, Morrisons - assumes there will be little demand for hydrogen fuel cell (HFC) powered vehicles between the five years from the initial availability of such cars and 2020, but demand will dramatically increase in the following 10 years.

The boom is predicated on the 10 per cent of motorists who will become HFC early adopters creating a sufficient market for the fuel to drive the roll-out of a nationwide hydrogen infrastructure. UKH2Mobility came up with its ten per cent figure after talking to 2000-odd consumers.

As the infrastructure expands, revenues will increase between 2020 and 2030 to cover not merely the expense of operating the nation’s hydrogen refuelling facilities and their various gas sources, but also to begin covering the cost of putting the infrastructure in place. UKH2Mobility reckons break even could come as early as 2027.

The early years of the forecast roll-out might see major cities and primary roads gaining 60-70 hydrogen fuelling sites between 2015 and 2020, enough to meet the needs of early adopters - drivers willing to go the extra mile (literally) for hydrogen. That infrastructure will cost around £60 million, with a mix of local hydrogen production - small volumes, but low cost - and larger-scale generation, which yields higher volumes but also higher distribution costs.

If all goes according to plan, the number of fuelling sites could ramp up to around 330 in 2025 - enough for half the population, though with an inevitable focus on London and the South East - reaching 1150 by 2030, at which point all Britons are within reasonable driving range of a hydrogen fuel source. That will require an extra £400 million spent on rolling out and running the infrastructure between 2020 and 2030, UKH2Mobility calculates.

Its sums tally only passenger vehicles. Commercial trucks will, it expects, not only come to hydrogen later but will be fuelled at base.

Chicken and egg: consumer demand for fuel cell cars grows - provided the infrastructure does too... Source: All charts via UKH2Mobility

With HFC cars pumping out far fewer nasties than petrol and diesel powered alternatives, and able not only to be topped up “almost” as quickly as a petrol car today but also to deliver a range that battery powered vehicles can only dream of, UKH2Mobility thinks hydrogen will win over no small number of motorists, even those less interested in the technology’s green credentials.

Pump up the volumes: the development of hydrogen availability in fuelling stations

In addition to what’s saved at the exhaust pipe, UKH2Mobility believes a mix of hydrogen production methods, among them the electrolysis of water and breaking down methane, will yield hydrogen that’s the same price as diesel by 2030 yet with a well-to-wheel supply chain that pumps out 75 per cent less CO2. By 2050, the hydrogen infrastructure from production through to user could yield zero net emissions, the group claims, thanks to a net reduction of CO2 emissions in the order of 10-30 million tonnes a year. The cost of putting right air quality damage could be reduced by £100-200 million by 2050, according to Department of Farming and Rural Affairs (Defra) cost guidance.

Of course, what UKH2Mobility can’t say is how much hydrogen cars and fuel will cost in the early days, and whether it will be low enough to begin persuading a good number of punters to make the switch from petrol and diesel. UKH2Mobility says it expects hydrogen to cost less than other fuels, not least because fuel cell systems consume fuel at half the rate that internal combustion engines do, so even if the pump price is higher, the economics are in the consumer’s favour.

But that’s true of today’s electric cars, which have nonetheless failed to attract a large user base. That’s because they’re more expensive up front, even with government subsidies. There’s nothing to suggest that won’t also be the case with the first HFC vehicles. Indeed, UKH2Mobility admits that HFC cars will be no less polluting than range-extended hybrids, which use petrol engines to generate power for long-distance travel, so environmentally aware drivers may shift to these kinds of cars in preference to hydrogen because they know they’ll be able to put petrol in the tank whereas hydrogen might be hard to find. 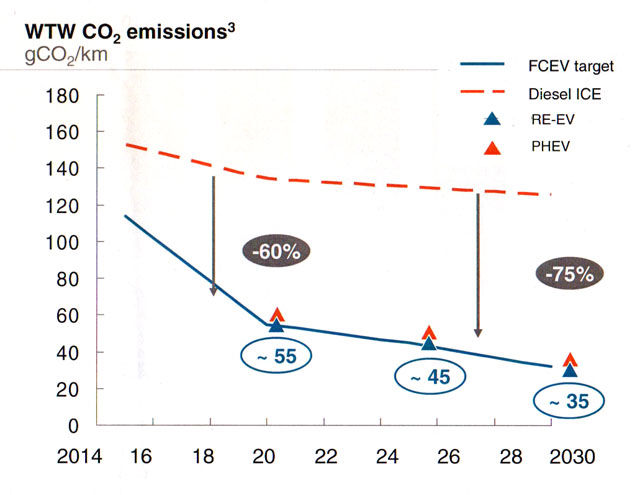 That will knock back UKH2Mobility’s growth forecast because it will be a disincentive to roll out hydrogen infrastructure, especially since government is likely to favour equally low-carbon technologies that deliver comparable carbon emission savings.

Making the business case for hydrogen is UKH2Mobility’s next goal. Having spent the past 13 months evaluating the potential for hydrogen - today’s figures will be formally released in a report to be published next month - the organisation will now need to come up with some persuasive arguments to encourage businesses to invest in the UK’s nascent hydrogen economy. If it can succeed, it thinks, we could see the first appearance of hydrogen at the pumps in the summer of 2014. ®