No solace in view for Quantum

Analysis Is Quantum going to surprise us all and not have a fourth quarter drop in revenues after climbing out of a trough since its fiscal 2013 year started? Are we going to see the same old, same old pattern or are Gacek's gang going to break out of the box they are in?

Quantum sells disk and tape data protection gear, data management and, latterly, object storage kit in the shape of Lattus. None of its new ventures have yet generated enough revenues to offset the declining tape product revenues it has been suffering from for some years - and my how they do decline. Water, as it were, is pouring out of Quantum's bath faster than the taps can refill it and the baby is circling the plughole. Let's take a gander at the numbers for the latest quarter; its third fiscal 2013 quarter ended 31 December 2012.

Revenues were $159 million, 8 per cent lower than the year-ago quarter due to tape product revenue declines, but they were 8 per cent more than the second quarter. The company expected to make $160 million and fell short. 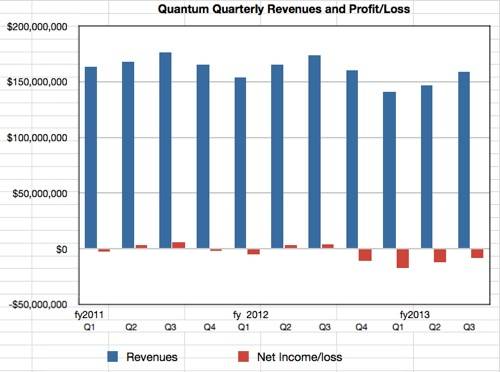 There's a pronounced seasonal pattern in Quantum's revenues, as the chart illustrates very well; quarters 1, 2 and 3 show a steady revenue climb but then the effort is wasted with a fourth quarter drop. There's no sense here of a sales force and channel striving to get the maximum revenue out of the final quarter.

Why not? Maybe the fact that its fiscal fourth quarter is a calendar first quarter is just too much to overcome. Suggestion; move the financial year back one quarter, Quantum, and get out of this trap.

Net income was net outcome as there was an $8 million loss, the fourth loss-making quarter in a row. A year ago Quantum made $3.9 million profit on $173.5 million revenue. Now it's an $8 million loss on $159 million revenue: it's as though break-even point is around $170 million revenue a quarter. Still the trend for three quarters is a declining loss but the fourth quarter will have to be a record breaker for the firm to turn a profit and that, with Quantum's fourth quarter revenue seasonality to date, simply isn't going to happen. 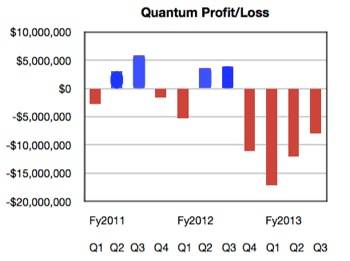 Blue's a profit and red's a loss

So here we are. How does Quantum management say we got here and where are we going? It said OEM and branded tape automation revenue declined year-on-year but, weirdly, tape automation revenue was 25 per cent up on the second quarter "as both midrange and enterprise sales rebounded strongly." Disk system and software sales were $41 million, a 13 per cent increase year-on-year, but that $41 million is in the context of total quarterly revenues of $159 million.

"The clear highlight in Q3 was our overall financial performance, including sequential revenue growth and the resulting profitability and cash flow."

Eh? Quantum lost $8 million in the quarter. We note profits on a GAAP (Generally Accepted Accounting Principles) basis because these enable comparisons between companies. Companies also state profits on a non-GAAP basis which exclude certain charges such as tax payments and depreciation. Companies are free to define non-GAAP profit pretty much as they see fit. Gacek said Quantum made a non-GAAP profit of $5 million in the quarter, largely driven by lower overall revenue.

"What we have said in the past remains true today. We are focused on running this business to generate profits and cash flow while maintaining our market leadership."

Take "market leadership" and ask "In what?" StorNex? It's trivia in revenue terms. In deduping appliances or in tape products? The tape revenues have been declining for years.

Take generating profits. The Quantum execs have seen their business lose money in six of the last ten quarters, including the last three and it most probably will lose money again in the next quarter. Yet, in the non-GAAP universe the profits picture is much better. This doesn't alter the basic facts though. This is a company showing no sign yet of tape revenues bottoming nor of the comparatively low disk system and software revenue level rising enough to help it generate substantial profits - real GAAP profits.

"Overall, our tape business has been outperforming the market. We acquired approximately 175 new midrange and enterprise tape customers in Q3, the highest new customer count in tape we have posted in 3 years."

This was after sales training emphasising tape as well as disk products for the sales force. Gacek said:

We've added a lot of salespeople this year. And I feel like we've added some great people, high quality from disk and software companies that everybody talks about, and their experience with tape is limited. And we recognized right away that we had a gap there, and we've put some processes in place to help support people. But that doesn't really scale. So we've done what you described. We've done lots of training. We put technical resources behind the sales folks to help them when they run into a difficult tape situation. I would say the team that we have now is up to speed and understands the products.

Maybe the tape business is bottoming out after all.

The outlook? Fourth quarter revenue should be between $145 million and $150 million. Argh; probably another fourth quarter drop "reflecting typical seasonality," according to Quantum.

You can bet your bottom dollar there will be a $4 million to $6 million loss, meaning a $597 million financial 2013 year at best, making the sixth straight year of decline. We've fed these numbers into a chart of Quantum's annual revenues and here it is:- 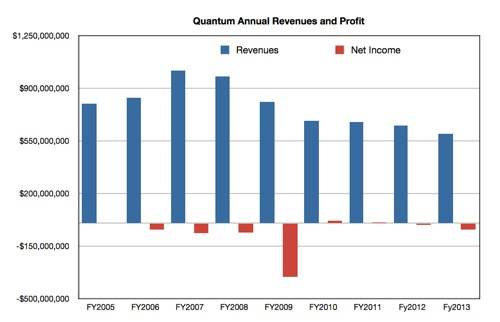 In seven of these nine financial years Quantum has made a loss. It's a dire picture.

Let's get it over with and head for fiscal 2014 with hope, which Gacek has:

"As we look forward to fiscal 2014 which begins in April, we believe we're in the right markets to drive growth … it will be a balance of driving for growth and making money and we expect to both grow and be profitable."

So how about a real profit Jon, a GAAP profit instead of a non-GAAP one? ®