Have a break, have a not-spot

A Dutch advertising company has set up Wi-Fi-free zones, promoting chocolate bars with what the UK's regulator would certainly rule to be illegal radio jamming.

The zones consist of a large sign proclaiming no Wi-Fi within five metres, and a bench where users can enjoy some lack of connectivity, but the promotion begs some interesting legal questions given that radio jamming is illegal across most of the world, outside some specific exemptions which don't include the promotion of chocolate bars. 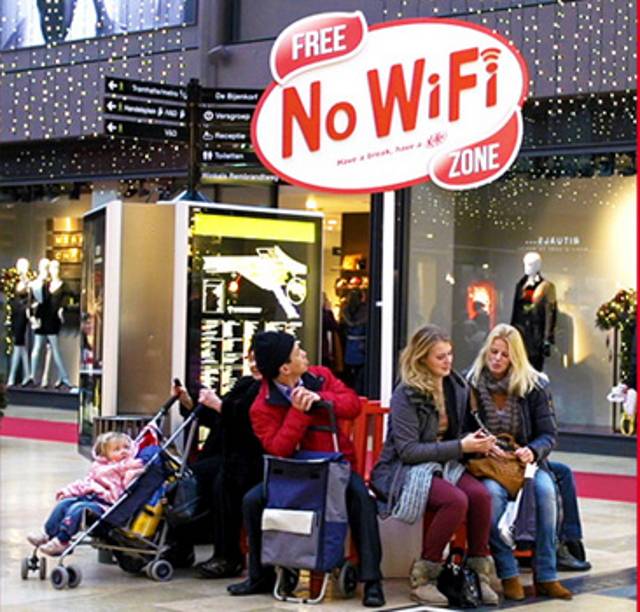 The promotion proudly states the Wi-Fi signals are "blocked" within five meters, but the only way to achieve such blocking is, of course, to transmit a jamming signal which would in turn be illegal, or at least be sailing very close to the wind.

The ISM band at 2.4GHz, in which Wi-Fi operates, is unlicensed, so anyone can transmit anything they like, but that doesn't include jamming. Wireless Waffle points out it would be perfectly legal to attach wireless cameras to the sign, and calculates that four of them would be sufficient to knock out any Wi-Fi usage nearby, one could then switch off the cameras but leave the transmitters active to create legal jamming.

That might be true in the Netherlands (though we suspect not) but such a promotion would certainly be illegal in the UK where it is the intent, not the procedure, which matters. Ofcom is very explicit:

"The use of any apparatus ... for the purpose of interfering with any wireless telegraphy, is an offence under the Wireless Telegraphy Act 2006"

We've been in touch with JWT Amsterdam, the advertising agency behind the stunt, to see what legal advice was sought before the jammers were erected, or even if their are no jammers and the adverts are just lying, but at the time of press it had not responded to our enquiries.

Not that it matters a great deal, local jamming is common enough, both accidental and deliberate, and we cope. Jamming is done legally to prevent terrorists using mobile phones to set off bombs, and ensure that our defence forces could cope if GPS got knocked offline, and while it's not as routine as some believe it is, we think this is the first time it has been used to sell chocolate. ®