Lunar probe confirms one blown down by Apollo liftoff

A NASA probe craft in orbit around the moon has confirmed that most of the US flags planted on the lunar surface by the Apollo astronauts of yesteryear are still flying, despite some scientists' having theorised that their fragile materials would have failed to survive extremes of temperature and radiation over the decades. 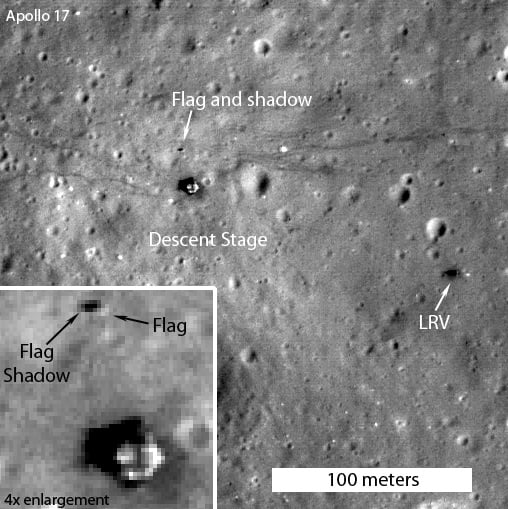 The probe in question is our old friend the Lunar Reconnaissance Orbiter (LRO), sent up by NASA to scout ahead of a proposed new wave of manned moon landings under the most recent Bush administration. However neither President Bush nor his successor Barack Obama managed President Kennedy's 1960s feat of getting Congress to give NASA the necessary enormous sums of cash, and the ambitious boots-on-Moon plans were axed.

But the LRO is still there, sweeping along in a very low orbit made possible by the Moon's lack of any atmosphere to slow it down or burn it up, and it has given us many excellent discoveries: the underground lunar tunnels, the two-lane bridge on the lunar farside and of course the discovery of game developer and space tourist Richard Garriott's lost nuclear-powered electric buggy.

Now the LRO has offered further bounty in the form of proof (see pic, more here courtesy of NASA and the LRO team) that most of the Apollo flags are still flying. LRO boffin Mark Robinson comments:

From the LROC images it is now certain that the American flags are still standing and casting shadows at all of the sites, except Apollo 11. Astronaut Buzz Aldrin reported that the flag was blown over by the exhaust from the ascent engine during liftoff of Apollo 11, and it looks like he was correct!

This was apparently by no means certain:

Personally I was a bit surprised that the flags survived the harsh ultraviolet light and temperatures of the lunar surface, but they did. What they look like is another question (badly faded?).

There's much more on the Apollo flags from NASA here. ®