A research paper by two American academics has concluded that one of the key factors in the increasing support among straight men for same-sex marriage comes down to how much pornography they consume.

The research, published in the peer-reviewed academic journal Communication Research, is based on a six-year study of 500 US males sponsored by the National Science Foundation. It followed their habits and attitudes from 2006 with regular surveys and interviews.

"Pornography adopts an individualistic, nonjudgmental stance on all kinds of nontraditional sexual behaviors and same-sex marriage attitudes are strongly linked to attitudes about same-sex sex," Wright told the Washington Examiner.

"Since a portion of individuals' sexual attitudes come from the media they consume, it makes sense that pornography viewers would have more positive attitudes towards same-sex marriage."

But before salacious magazines and emails start getting fired off to legislators across the world, El Reg would like to strike a cautionary note. The good professors' conclusion sounds like it could well be a case of "Post hoc ergo propter hoc" (which is Latin for "after this, therefore because of this.")

Support for gay marriage in the US has been steadily rising over the last decade as the generation raised when homosexuality was illegal either wise up or die off. Younger Americans are far more likely to see same-sex marriage as not a major issue, and certainly not something with which the state should try and interfere.

But before our male readers start trying to sell their wives and girlfriends on the excuse that "I'm just doing my bit for gay marriage," remember that with the right statistical jiggery-pokery, you can show a correlation between pretty much anything: 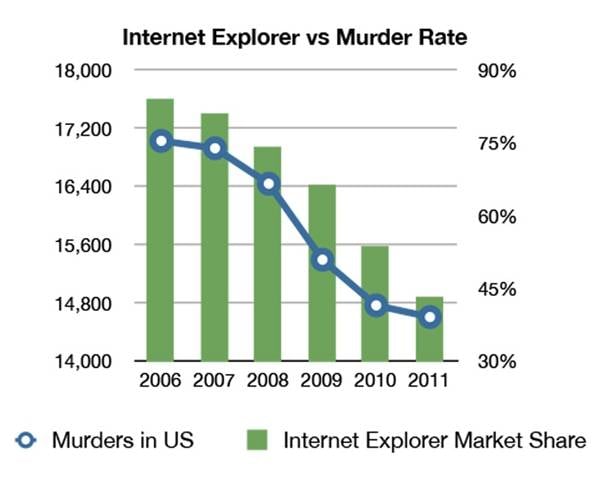 Is Firefox saving lives? No.

Interview Content tagging – and I'll give the tech away for free, says Safecast Global chief